Akshay Kumar said: "I will not work with any proven offenders" 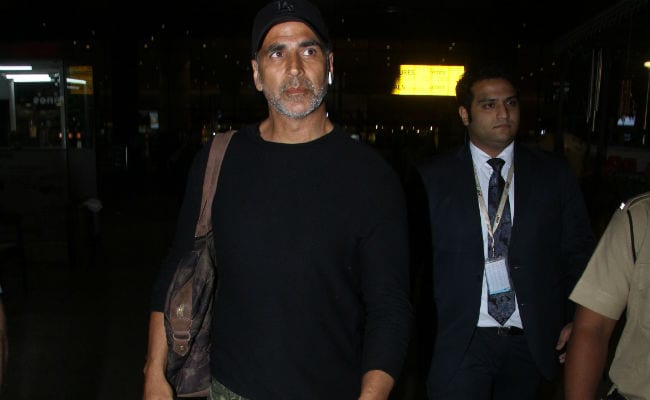 Actor Akshay Kumar today said he had asked that the shoot for Housefull 4 be cancelled after #MeToo allegations emerged against its director Sajid Khan, who declared he was taking "moral responsibility" to step down. "I will not work with any proven offenders and those who have been subjugated to harassment should be heard and given the justice they deserve," Akshay Kumar, who recently returned from a family holiday, tweeted on Friday.

Shortly after Akshay Kumar's tweet, Sajid Khan announced that he was stepping down as director "till the time I can allay the allegations".

Earlier, Akshay Kumar's wife Twinkle Khanna had tweeted that "everyone involved" in the film - which includes her husband - needed to take a firm stand.

Appalled hearing multiple incidents of harassment and it is truly horrific to hear what these women have been through. Everyone involved in Housefull needs to take a firm stance on this issue. This cannot go on.

When Tanushree Dutta revived a decade-old controversy naming Nana Patekar as a sexual predator, team Housefull 4 was in Jaisalmer. On the day Ms Dutta shared her account of being harassed by Nana Patekar on the sets of a 2008 film, Farah Khan (Sajid Khan's sister and choreographer in-charge for the project) posted this image of Nana Patekar arriving in Jaisalmer with the team:

Nana Patekar has denied the allegation, saying: "I would say what I said 10 years back, the truth doesn't change." The actor has sent Ms Dutta a legal notice. Earlier this week, she filed an FIR in Mumbai.

Sajid Khan has been accused of sexual misconduct by actresses Rachel White (Ungli) and Saloni Chopra (TV series Screwed Up), and journalist Karishma Upadhyay. In a blog post, Ms Chopra accuses Sajid Khan of harassing her mentally, emotionally and sexually. Rachel White re-tweeted Saloni Chopra's account and added her own story. Among other allegations, Ms White said that Mr Khan told her she could get a role in his film (he was casting for 2014 film Humshakals) if she could "seduce him in 5 minutes." On her Twitter page, Karishma Upadhyay shared what happened with her when she interviewed Sajid Khan in early 2000s. Like Ms Chopra and Ms White, Ms Upadhyay also claimed that Sajid Khan started with "trash talk" and added he tried to forcibly kiss her.

The #MeToo movement knocked on Bollywood's door recently and several prominent members of the film industry, such as Alok Nath, Rajat kapoor and Vikas Bahl, have been outed as sexual predators.