In Pic Of Smiling Nana Patekar, Kriti Sanon And Others, No Whiff Of Controversy 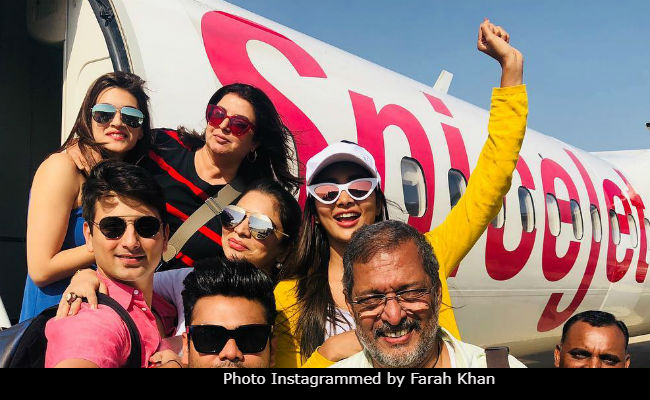 It's like Tanushree Dutta's explosive allegations against Nana Patekar never happened. If the show must indeed go on, it doesn't look like Bollywood is gritting it's teeth and carrying on - from the blithe faces in this picture posted by filmmaker Farah Khan, one of which is Mr Patekar's. In it, Mr Patekar, accused of sexual harassment and using political connections to threaten Ms Dutta 10 years ago, smiles with Farah Khan and actresses Kriti Sanon and Pooja Hegde as they board a flight to Jaisalmer for their work-in-progress film Housefull 4. Ms Khan's caption gives absolutely no indication of the controversy currently raging. Nor do the two comments Gauri Khan left on the post - a 'hahaha' in words and an emoji.

Ms Dutta has spoken at length about the alleged harassment in several interviews this week, one of them to NDTV. She accuses Mr Patekar not only of having unwelcome advances while filming a song on a 2008 movie - she later quit the project - but also of sending political goons to intimidate her.

Tanushree Dutta has also named actors Rajinikanth and Akshay Kumar as having made films with Mr Patekar despite allegedly knowing of the accusations against him.

In the same statement to News18, choreographer Ganesh Acharya said "Something happened" and also "It never happened." Mr Acharya worked on the 2008 film in question. On Twitter, journalist Janice Sequeira said she had been on set the day the alleged harassment took place and confirmed much of what Ms Dutta's version of events.

Tanushree Dutta is known for starring in a handful of films such as Aashiq Banaya Aapne and Apartment, her last movie. Nana Patekar was last seen on Kaala - opposite Rajinikanth.