Bollywood celebrities such as Shah Rukh Khan, Aamir Khan, Ranbir Kapoor and Alia Bhatt joined the Ambanis and the Mehtas in Switzerland 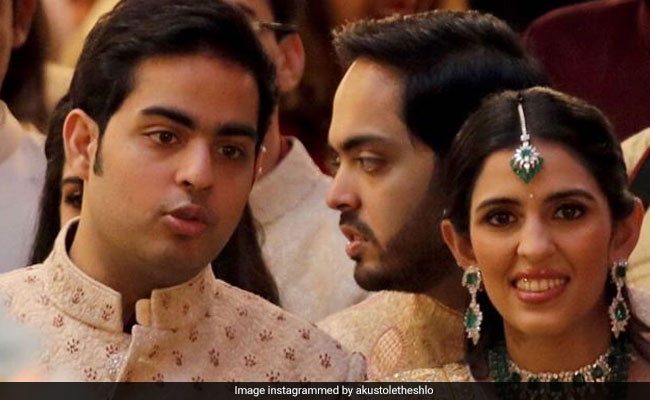 After an extravagant three-day celebration in picturesque St Moritz, expect the forthcoming pre-wedding, wedding and post-wedding galas of Akash Ambani and Shloka Mehta, to have the Who's Who of Bollywood, politics and the sports world. There's widespread interest in everything to do with the wedding -- from the card which came with devotional music and pop-up elements, the decor, the ensembles, the jewellery, the dances and most of all, the guest list.

"Invites have gone to all... From (film) celebrities to sportspersons to politicians," a source told IANS, without naming any of the guests. While most people in the know are tight-lipped about the wedding events, Twitterati has pointed out how the wedding may mark "funny days" in the election season. "Will Narendra Modi, Amit Shah, Rahul Gandhi, Priyanka Gandhi attend wedding of Akash Ambani and Shloka Mehta," wrote one user.

According to the invitations, a 'Mala and Mehendi' function at the Dome, NSCI, Worli, on the evening of March 7, will start the major functions of the wedding. The wedding on March 9 will be held at the Jio World Centre, Bandra-Kurla Complex (BKC). This will be preceded by an 'assembly of baraat' at around 3:30 p.m. at Trident Hotel, BKC, followed by 'baraat swagat and high tea' at 6:30 p.m. and 'Hasta Melap' at 8:01 p.m. and then dinner.

A day before the formal wedding reception on March 11, a night of celebrations will be held at the Jio World Centre.

Aamir had even joined bride-to-be Shloka for a gig on Aati Kya Khandala.

After Beyonce performed at Akash's sister Isha's sangeet and made the world sit up and take notice of the big fat Indian wedding, the buzz is strong that American pop band Maroon 5 will be performing at the forthcoming celebrations.

The interest in the wedding is already at its peak since the social media has remained abuzz with glimpses of the parties in St Moritz.

A carnival-themed party, Winter Wonderland, was also opened to around 250 locals for two hours. It prominently featured the couple's social media hashtag #AkuStoleTheShlo as the entrance banner for the bash in the luxury Alpine resort town.

Akash and Shloka arrived in a white horse-driven carriage for the carnival, which at night had a spectacular display of fireworks.

If that wasn't enough, they had Coldplay rocker Chris Martin and American DJ and production duo The Chainsmokers rock away at a musical night.

Even before the Swiss celebrations, the wedding festivities had set in the Ambani home Antilia with a February 18 garba night performance by singers Falguni Pathak and Tushar Trivedi.