After IPL Performance, AR Rahman Posts About Barricade Giving Up Due To "Overflowing Love" 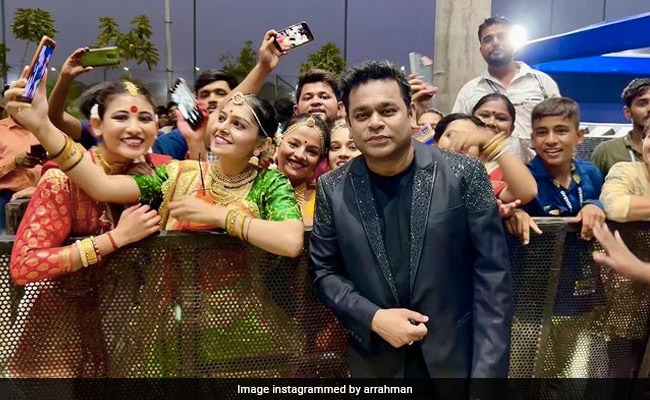 The closing ceremony of the Indian Premier League 2022 on Sunday was a star-studded affair with celebrities like music legend AR Rahman and actor Ranveer Singh putting up impressive performances. The Oscar-winning composer-singer was joined by a band of talented musicians such as Benny Dayal, Mohit Chauhan, Neeti Mohan, and Shweta Mohan, among others. Led by AR Rahman, the band performed a variety of songs including the composer's iconic track Vande Mataram. Post the show, AR Rahman has shared a bunch of images from the closing ceremony on Instagram. In fact, so impressed were fans by the performance that they huddled over the barricade at the venue after the ceremony to pose for pictures with AR Rahman, causing it to fall over, one post revealed.

Sharing details along with a picture clicked moments before the barricade toppled over, AR Rahman said, “Post IPL T20 performance…Before the barricade gave up on the overflowing love …and fell on us.” The fans look thrilled in the image, don't they?

Before setting the stage on fire with the spectacular show, AR Rahman also shared a video of some of the background dancers and performances making their way to the venue. Sharing a video of the artists waving at the maestro, he wrote, “All artists…one family.”

AR Rahman also followed this up with images from his performance. In one such photo, he is on stage with Neeti Mohan on one side and Shweta Mohan on the other. The music director skipped the caption for the image. Reacting to the image, Jonita Gandhi dropped star-eye emojis. Neeti Mohan wrote, “Sir, your smile.”

In another photo, AR Rahman is with his son, AR Rameen alongside Ranveer Singh, Neeti Mohan, Mohit Chauhan, Shweta Mohan, and Nakul Abhyankar.  Once again, there was no caption shared with the post.

Here's a glimpse of AR Rahman's IPL 2022 closing ceremony performance shared by the official Twitter page of the Indian Premier League. The tweet along with the video says, “Vande Mataram. AR Rahman's magical performance will touch your hearts.”

Meanwhile, Ranveer Singh also put up a spirited performance at the closing ceremony and grooved to songs from his films such as Tattad Tattad from Goliyon Ki Rasleela Ram-Leela, Gallan Goodiyaan from Dil Dhadakne Do, and Ghoomar from Padmaavat. Also on the list were songs from recent films such as KGF Chapter 2, RRR, and Master.