According To Parineeti Chopra, Food Is Meant To Be "Hugged." See Her New Pic From Austria Vacation 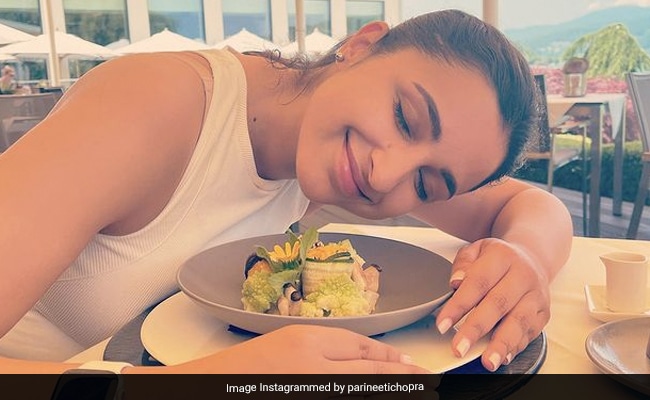 Parineeti Chopra doesn't eat but "hugs" her food on vacations. Proof? Her latest entry on Instagram. The actress, who is currently vacationing in Austria, Europe, posted a new photo from her trip on her Instagram profile and accompanied it with a quirky caption. "eat hug your food," she wrote in the caption of her photo, in which she can be seen hugging her meal on a plate and smiling with her eyes closed. Parineeti Chopra looks pretty in a white outfit in the picture. On her post, her brother Shivang hilariously commented: "Such pretty food deserves hugs. I too deserve hugs."

Last week, Parineeti picked a stunning picture of herself from her Austria vacation album to post on social media. She can be seen posing against a beautiful view - blue sky, blue water and lush green mountains - in the photo. "Arghhh nature! why so beautiful?" she wrote in the caption. Take a look:

Parineeti Chopra was last seen in Sandeep Aur Pinky Faraar. The film opened to positive reviews last month. In his review for NDTV, film critic Saibal Chatterjee gave the film 3.5 stars and wrote: "Sandeep Aur Pinky Faraar gives Bollywood conventions a wide berth. It proffers nothing that one would expect from a tale of two fugitives yoked together by circumstances. It isn't a romantic road movie nor a bickering-pair-on-the-lam thriller. Suffice to say, it is a Dibakar Banerjee film. That is the only label one can pin on it." In Sandeep Aur Pinky Faraar, the actress featured alongside Arjun Kapoor.

She was also seen recently in The Girl On The Train and the Saina Nehwal biopic.