"Which artist corresponds to which character in our movie according to you?" asked Abhay Deol 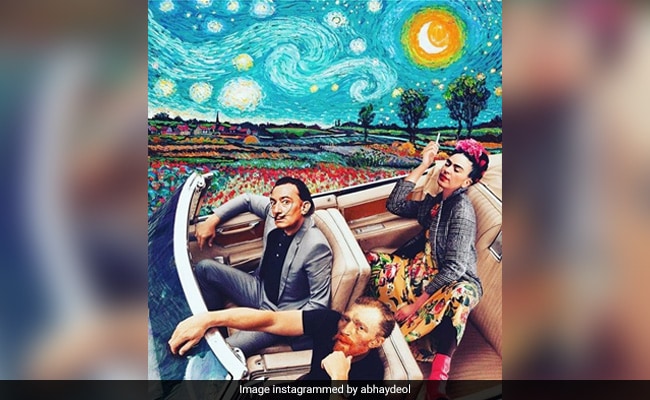 Zindagi Na Milegi Dobara, which clocked 10 years earlier this month, has been a trending topic for quite some time. Abhay Deol, who starred as the ambitious Kabir Dewan in the film, shared an artwork by Ertan Atay. Separated by time and united by art, the creation features some of the greatest artists of all time, Salvador Dali, Vincent Van Gogh and Frida Kahlo, sitting together in a car. Abhay Deol added a ZNMD twist to the post and he wrote: "Here's your part 2 to #zindaginamilegidobara! Which artist corresponds to which character in our movie according to you? Match by their personalities."

Let's just say that the Internet got busy with Abhay Deol's post. Fans of the Zoya Akhtar-directed film started matching the characters' personalities to the aforementioned artists. "Oooooo tough one. Van Gogh - Arjun (played by Hrithik Roshan), Frida - maybe Imran (played by Farhan Akhtar)," commented a fan. Kabir as Van Gogh seemed to be a popular pick, these comments are proof: "Van Gogh has to be you" and "Van Gogh is definitely you." Another comment read: "Van Gogh is definitely you aka Kabir. Dali - HR aka Arjun, Frida Kahlo - FA aka Imran." Another fan added, "Farhan is Frida for sure."

On 10 years of ZNMD, Hrithik Roshan, Katrina Kaif, Abhay Deol, Zoya Akhtar and Farhan Akhtar reunited for a virtual table read session of the film, which was moderated by comedian-actor Vir Das. "To memories that will last a lifetime, unbreakable bonds, crazy moments and a decade full of love," Farhan Akhtar wrote sharing the video.

Directed by Zoya Akhtar,  the film followed the lives of three friends, who reunite during a road trip in Spain and end up discovering themselves during the adventurous journey. The film redefined friendship goals and how. It also featured Kalki Koechlin and Naseeruddin Shah.