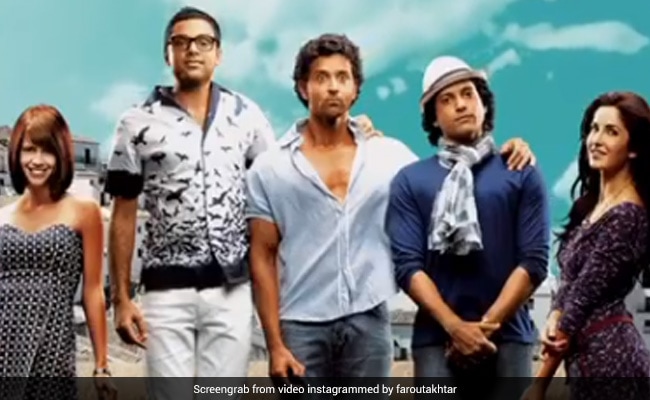 A still from the motion poster shared by Farhan Akhtar.(Image courtesy: faroutakhtar)

Filmmaker Zoya Akhtar's much-loved movie Zindagi Na Milegi Dobara clocked 10 years today and the film's cast celebrated the 10-year-anniversary with a special reunion. Zoya Akhtar and the cast of the film including Hrithik Roshan, Katrina Kaif, Abhay Deol and Farhan Akhtar reunited over a virtual table read session of the film. Farhan Akhtar shared the video of the table read session on Instagram. While the four main cast members were present during the table read session, they did miss Kalki Koechlin, who also played a pivotal role in the film. The reunion was hosted by actor-comedian Vir Das. Zindagi Na Milegi Dobara's producer Ritesh Sidhwani and film's co-writer Reema Kagti were also present during the session. During the table read, the cast members read and enacted select scenes from the film. The video is proof of how much fun Hrithik Roshan, Katrina Kaif, Farhan Akhtar and Abhay Deol had during the reunion.

Sharing the video on Instagram, Farhan Akhtar wrote: "10 Years of ZNMD. To memories that will last a lifetime, unbreakable bonds, crazy moments and a decade full of love." He added: "Our favourite gang is here yet again for a special treat! 10 years later, team ZNMD reunites for a virtual table read, reminiscing the best moments from a journey close to our hearts. Celebrating #10YearsOfZNMD."

Take a look at the virtual table read session here:

Earlier in the day, Zoya Akhtar marked Zindagi Na Milegi Dobara's 10 years with a special BTS video. She shared the video on the Instagram account of her film company Tiger Baby Films. The video is a compilation of BTS clips from the time when the film was being shot. "An unforgettable ride," the caption of the video read.

Zindagi Na Milegi Dobara was a refreshing film that redefined friendship goals. It follows the lives of the three main characters played by Hrithik Roshan, Abhay Deol and Farhan Akhtar. Even after 10 years of its release, the film continues to be on the favourite list of many.

How Does One Keep Kids Engaged On A Holiday? Gul Panag Has The Answer