Aamir Khan Instagrams Pic With Wife Kiran Rao, 'The Cutest In The World' 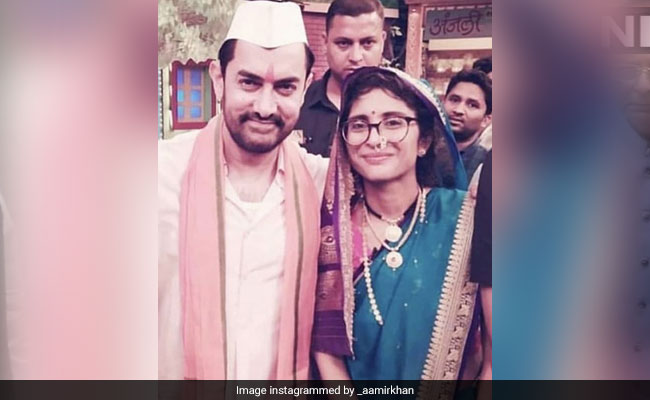 Aamir Khan rarely Instagrams photos of his family and hence on Friday, we were delighted to spot his new post! The 54-year-old superstar shared a photo of himself and his filmmaker wife Kiran Rao and added an adorable caption: "The cutest in the world... mazi baiko," he wrote and signed up with the heart emoji. The Marathi phrase "Mazi baiko" translates into English as "the love of my life." In the photo, both Aamir Khan and Kiran Rao can be seen dressed in traditional Marathi attire. Aamir sports an all-white kurta look with a 'Pehta' or a topi while Kiran Rao is draped in a traditional Marathi saree called Lugade. Her jewellery includes a traditional nath and gold ornaments, essentials to complete the look of a Marathi mulgi.

Aamir Khan's Instafam wasted no time to review the photo and flooded his feed with comments like: "You both look so cute together", "the cutest couple in the world", "this is one of the cutest photos of the world" and "most fancy couple." Meanwhile, several fans also suggested that Aamir and Kiran's photo is from the sets of The Kapil Sharma Show.

The cutest in the world... mazi baiko

Aamir Khan and Kiran Rao married in 2005 and are parents to son Azad, who was born in 2011. Ira and son Junaid are Aamir's children with his first wife Reena Dutta. Kiran Rao directed Aamir Khan in 2011 film Dhobi Ghat. She has also produced films such as Talaash, Dangal and Secret Superstar.

Aamir Khan was last seen in Thugs Of Hindostan and his next film is titled Lal Singh Chaddha.