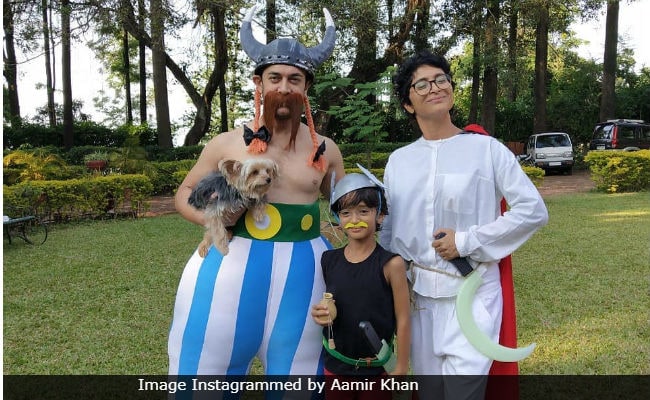 Yes, it was Azad Rao Khan's 7th birthday over the weekend and he is an Asterix fan, therefore the wonderfully detailed party in Panchgani where Azad's parents Aamir Khan and Kiran Rao recreated the characters and storyline from the beloved comics about a tiny village of indomitable Gauls holding out against the military might of Julius Caesar. If you, like us, have been awed by the attention to detail at the party, let's not forget that Mr Perfectionist himself was involved. "Azad is a big fan of Asterix, so we along with 8-10 of his friends and their parents went to Panchgani," Aamir revealed on the sidelines of Cinestaan India's Storytellers Contest. He added, "I, of course, played Obelix. Azad played Asterix and Kiran was Getafix the druid."

If that sounds awesome, the pictures that went viral are even more so. As the famously hefty Obelix, Aamir wore a striped fat suit for authenticity and also co-opted a dog - presumably the family pet? - to play Dogmatix. 'Getafix,' complete with golden sickle, even brewed up a cauldron of 'magic potion' for guests and, just as in the comics, Obelix lined up for his share and was refused - because, as any Asterix fan knows, he fell in the potion as a baby.

And here are the pictures he posted on Instagram on Sunday:

Obelix waits in line for the magic potion, while Asterix is drinking his dose.

And Obelix is refused the magic potion by Getafix!!!

These Romans, sorry, these celebrities are crazy. Next year, we'd like Cacofonix the Bard added to the dramatis personae please.

Aamir Khan married filmmaker Kiran Rao in 2005 and the couple welcomed Azad in the year 2011. Aamir was earlier married to Reena Dutta and the couple got divorced in 2002. Reena and Aamir are parents to daughter Ira and son Junaid.

On the work front, Aamir Khan was last seen in Thugs Of Hindostan, co-starring Amitabh Bachchan, Katrina Kaif and Fatima Sana Shaikh. Aamir has not announced his next project as of now.