"It's always tea time," Athiya captioned her photos, which prompted a comment from cricketer KL Rahul 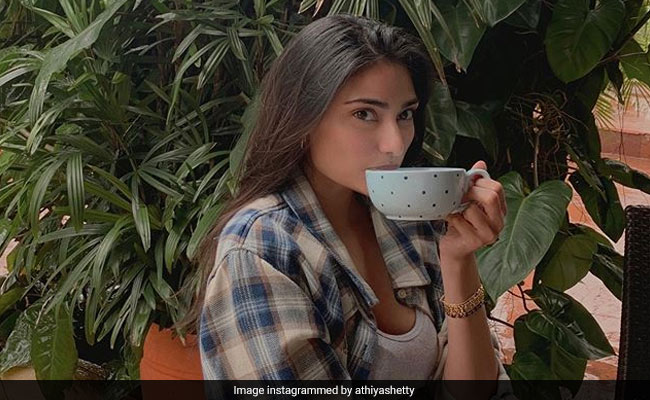 Hello there, Athiya Shetty. The 27-year-old actress was in the mood for some tea and also opted for a photoshoot while sipping a hot cuppa. "It's always tea time," she captioned her photos, which prompted a comment from cricketer KL Rahul, who Athiya is rumoured to be dating. KL Rahul, who is currently with his Kings XI Punjab teammates, prepping for the IPL, took out time from his busy schedule to drop the black heart and the angel emojis on Athiya's post. Athiya responded with the feeling fuzzy emoji. Without further ado, take a look at Athiya Shetty's tea-time photos and her adorable exchange with KL Rahul on Instagram:

KL Rahul, who often drops mushy comments on Athiya's posts, recently reacted to this photo of her mother Mana Shetty with the heart emoticon.

no words could ever do justice...happy birthday to my whole ♥️. i love you, mama.

Athiya Shetty and KL Rahul often trend for their social media exchanges but have never addressed their rumoured relationship as such but Athiya's birthday wish for her cricketer friend this year appeared to make things Instagram official. "Happy birthday, my person," she had written for KL Rahul along with a cute selfie of the two.

Last year, Athiya Shetty and KL Rahul featured in headlines for their speculated dating life with reports stating that the duo apparently began seeing each other since February 2019. Rumours were fanned on Athiya's birthday in November when KL Rahul shared an adorable birthday wish for her. Athiya Shetty is the daughter of actor Suniel Shetty and Mana Shetty. She made her Bollywood debut with 2015 film Hero, also featured in Mubarakan and was last seen in Motichoor Chaknachoor.