Kabir Khan revealed that the moment in the film belongs to a match which was never televised during the 1983 cricket world cup. 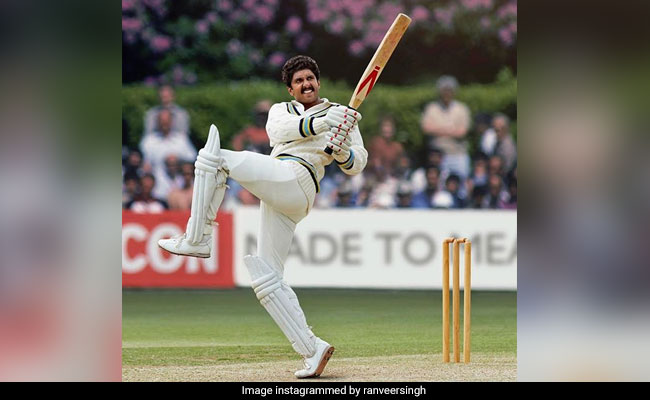 'Ranveer Singh as Kapil Dev' swiftly became a top trend on Twitter after the 34-year-old actor shared a still from his upcoming film '83, in which he plays the role of the former cricketer onscreen. The beauty of the still is Ranveer Singh acing Kapil Dev's iconic Natraj shot. Ranveer's colleagues were stumped by the level of accuracy and showered praises on the actor. Even Kapil Dev found Ranveer's shot "very impressive" - he wrote in the comments thread. "Ek baar phir champion," commented Ayushmann Khurrana while Dia MIrza wrote, "Ranveer Singh you are so special." '83 is a fictionalised retelling of India's historic victory at the 1983 cricket world cup. '83 director Kabir Khan also shared the still on his Instagram page and said that the moment in the film belongs to a match which was never televised and which was played in Tunbridge Wells, England, on a cold windy day.

"The match that was never televised... a world record innings that India never saw... this April the world will see how history was made on that cold windy day in Tunbridge Wells," Kabir Khan wrote.

Wait no more, take a look at Ranveer Singh as Kapil Dev in '83:

Ranveer Singh, who plays Kapil Dev (who led the Indian team at the 1983 world cup) in the movie, earlier told IANS that the role was 'uniquely challenging.' Ranveer Singh, who shadowed Kapil Dev for weeks to learn his mannerisms, told IANS that this was the longest he had prepared for a role. "This is the longest I have prepared for any role. I have been preparing essentially for about six months. I have done three weeks, three and a half weeks, four weeks, six weeks, but six months preparing for a character is unique... But then, it's a unique film in itself," said Ranveer Singh.