"25 years! Filled with gratitude towards you for loving Raj and Simran, with all your heart," tweeted Shah Rukh Khan 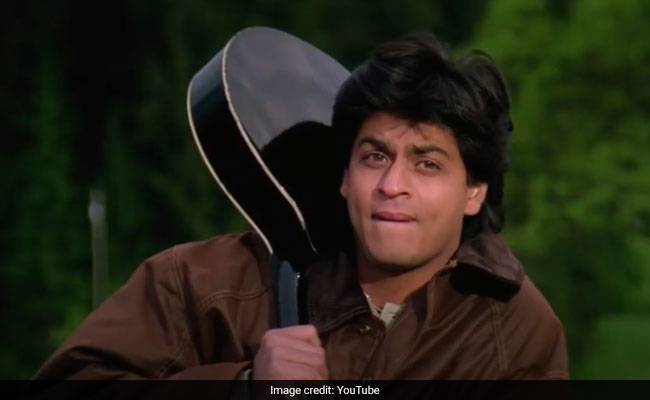 Shah Rukh Khan in a still from DDLJ (courtesy YouTube)

First, a very happy Dilwale Dulhania Le Jayenge day. Today is a special day as the iconic DDLJ released on October 20, 25 years ago. Dilwale Dulhania Le Jayenge established the Kajol and Shah Rukh Khan jodi as an evergreen example of classic Bollywood romance and looks like nothing's changed even after 25 years. Shah Rukh Khan and Kajol, who began the day by changing their social media profile photos to their onscreen characters from DDLJ, also recreated an iconic scene - the palat moment - on Twitter. It began with Yash Raj Films' tweet, which tagged Shah Rukh and Kajol to share a rehashed dialogue from the film: "Raj, agar Simran tujhe pyaar karti hai toh woh palat kar dekhegi (If Simran loves you, she will turn and look at you)."

And she did palat. Check out Kajol's tweet here:

Raj and Simran fell in love after their chance meeting in Europe. This palat scene took place when it was finally time for Raj and Simran to part ways.

Earlier on Tuesday, Shah Rukh dedicated his Twitter moniker to Raj Malhotra while Kajol is Simran on Twitter now. Re-sharing a video of DDLJ moments posted by Yash Raj Films, Shah Rukh tweeted: "25 years! Filled with gratitude towards you for loving Raj and Simran, with all your heart. This always feels special."

25 years!!! Filled with gratitude towards you for loving Raj & Simran, with all your heart. This always feels special. #DDLJ25@yrfpic.twitter.com/HHZyPR29f9

Meanwhile, Kajol added: "Raj and Simran! 2 people, 1 film, 25 years and the love doesn't stop coming in. I am truly grateful to all the people who made it what it is today... a phenomenon and a part of their own history. The fans! Big shout-out to all of you!"

I am truly grateful to all the people who made it what it is today.. a phenomenon and a part of their own history. The fans! Big shoutout to all of you♥️#25YearsOfDDLJ@yrf@iamsrk#AdityaChoprapic.twitter.com/ikkKFef6F1

Actor Anupam Kher, who played the role of Raj Malhotra's father - referred to as "Pops" in the movie - also shared an emotional note on Instagram, along with a bunch of photos from the film's sets: "Proud to be part of this iconic film which completes 25 years today. Yes, your love has been a constant!! A big thank you!"

Stylist Anaita Shroff Adajania, who is now the fashion director for Vogue India, featured as one of Simran's best friends in the movie. Celebrating 25 years of DDLJ, Anaita shared an interesting story about being cast in the movie by director Aditya Chopra and Karan Johar, who featured as one of Raj Malhotra's friends: "I did it for a laugh and a paid holiday to Europe with my bestie, which was a really big deal for a broke student," she wrote.

I was in college when Adi and Karan asked me to help them cast my college friends to play Raj and Simrin's friends in the film. This was my introduction to the film industry- a world I knew nothing about at the time. In the process they convinced me into playing Sheena. I did it for a laugh and a paid holiday to Europe with my bestie, which was a really big deal for a broke student. I remember reaching Saanen, a small town in Switzerland , fresh off the bus ( ok plane) and seeing Shahrukh in his black suit on a little bridge ...and for me I felt that he was there only for me! I'm sure whoever saw him on that bridge felt the same way - that's why he's Shahrukh. Kajol was just Kajol - real, instinctive, full of love (and still gives the tightest hugs ever). You have to remember that these were times when they were no entourages, no managers and mobiles, no social media...film making was much simpler, but extremely passionate. Once we were there, we were cut off from the rest of the world for over a month. We would all live together, eat together, sing together, dance together... we become a real family, under the warm gaze of a legend like Yash uncle (Yash Chopra). Adi knew DDLJ from his core, and strove for nothing less than perfection. We all hung out and helped each other in ways only close knit friends and families do. Never having any acting ambitions( thankfully), I'm so glad that I was part of this brilliant film and that I can still call everyone that I worked with a friend. I'm so happy to have been a tiny part of this massive legacy. #DDLJ25 #25yearsofDDLJ @yrf #adityachopra