Kajol, In A DDLJ State Of Mind, Shared This

"Flashback to when we dressed up to go out," wrote Kajol 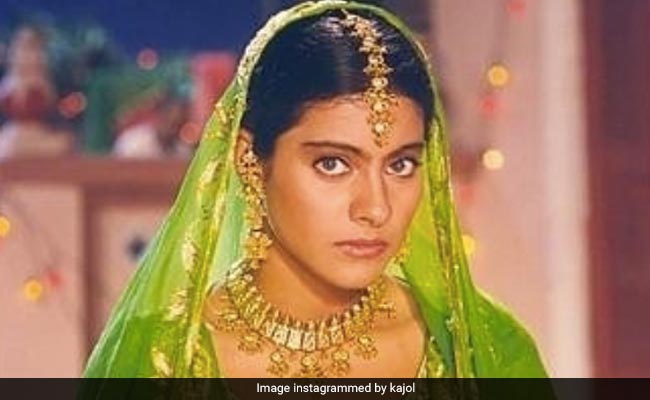 Kajol, in coronavirus lockdown, is going through the dust-caked albums and revisiting memories. On Tuesday, the 45-year-old actress took another trip down memory lane and fished out a priceless throwback picture from her 1995 romantic drama Dilwale Dulhania Le Jayenge. The picture, while is a still from the song Mehndi Laga Ke Rakhna, features Kajol dressed in a green lehenga. Sharing the throwback picture, Kajol referred to the coronavirus lockdown and wrote a humour-infused caption: "Flashback to when we dressed up to go out." She also added the hashtag "looking back" to her post. Take a look:

Flashback to when we dressed up to go out.... #Lookingback

Within minutes, Kajol's picture was flooded with comments from her friends and fans. Manish Malhotra, who was the costume designer for Dilwale Dulhania Le Jayenge, reacted to the picture and wrote, "The colour that became a rage and the film that became the iconic film of our times."

Directed by Aditya Chopra, Dilwale Dulhania Le Jayenge was the story of Raj and Simran, played by Shah Rukh Khan and Kajol, who fell in love during their vacation in Europe. They soon got separated as Simran's father, played by Amrish Puri, took her to their ancestral home for her marriage. Raj followed Simran to Punjab and tried to win over her family. The film won many awards and accolades, post its release, including the National Award for best popular film providing wholesome entertainment. Produced by Yash Raj Films, Dilwale Dulhania Le Jayenge was the highest-grossing Bollywood film of 1995. Dilwale Dulhania Le Jayenge is the longest-running film in the history of Indian cinema - it was still running in Maratha Mandir, a cinema hall in Mumbai, before movie theatres shut due to lockdown.

Coming back to Kajol. The actress keeps sharing humour-infused posts referring to the coronavirus pandemic, on her Instagram profile. A few days back, Kajol shared an upside down selfie of herself and wrote, "Upside down selfie in an upside down world. Is there a right way to selfie? Or is it each to his own. Hmmmm. That's a thought."

Upside down selfie in an upside down world! Is there a right way to selfie? Or is it each to his own .... hmmmm . That's a thought ! #selfcare #selflove #allpaths #nojudgement

This is Kajol's reaction to Sunday and Monday being "just the same." Take a look:

When Sunday and Monday are just the same... #lockdownstories #WaybackWednesday