As DDLJ Clocks 25 Years, Twitter Boards The Train Of Raj And Simran's Memories 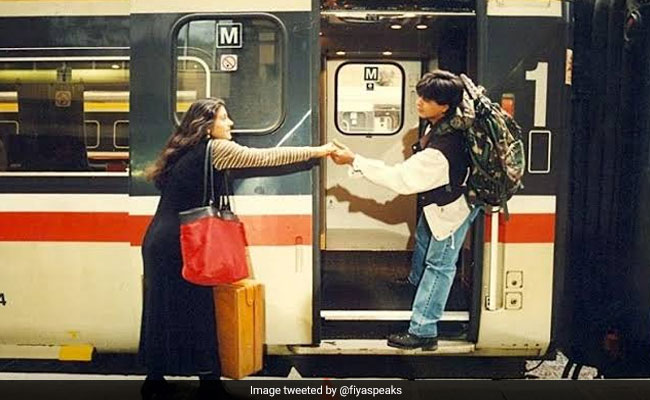 DDLJ: Kajol and Shah Rukh Khan in a still from the film. (courtesy fiyaspeaks)

25 years ago, a girl named Simran (played by Kajol) and a boy named Raj ( played by Shah Rukh Khan) stole the hearts of people all over the world when Dilwale Dulhania Le Jayenge, a cinematic gem released in cinemas. As the film clocked 25 years on Tuesday, Twitter users poured their hearts out and shared some of their favourite DDLJ moments and memories related to the film. Some even gave their own twist. The 1995 film Dilwale Dulhaniya Le Jayenge, which marked Aditya Chopra's debut as a director, starred Shah Rukh Khan and Kajol in the lead roles and the onscreen romance-drama redefined a whole genre of films.

It would be impossible to talk about the film without the mention of the iconic Palat scene. Raj's way of knowing Simran loved him or not. She did, of course. Fans remembered the scene. "This iconic scene is 25 years old and it inspired so many other romantic scenes," tweeted a fan.

This iconic scene is 25 years old and it inspired so many other romantic scenes#Palat#DDLJ#25YearsOfIconicDDLJ#DDLJ25pic.twitter.com/yvTxmMIIpu

Fair enough to say that this SRK aka Raj Malhotra's entry scene in the film has a separate fan base. This tweet is proof.

The way the audience erupts in joy on SRK's entry scene is always phenomenal
RT if you have experienced this at Maratha Mandir. #DDLJ#ShahRukhKhanpic.twitter.com/I0YaDntccl

Model-singer Sophie Choudry, in her tweet described DDLJ as the "best film ever." She made an interesting observation, attributed to her personal experiences in life. "Also set the bar really high for guys to be able to impress this London girl," she wrote.

Best film in the world
Also set the bar really high for guys to be able to impress this London girl
Love you @iamsrk .. Stay blessed always!! Congrats team #DDLJ@yrf@itsKajolD and thank you!! #DDLJ25https://t.co/uvC8gz8SqK

Is it even possible to remember the film without talking about these evergreen dialogues ? "Bade bade deshon mein aisi choti choti baatein hoti rehti hai, Senorita" and "I am Raj, naam toh suna hoga."

"I am Raj, naam toh suna hoga."
All time favorite & will always.#DDLJ25pic.twitter.com/DgA2UqWwM5

Count Ranbir Kapoor as a die-hard fan of the film too, please.

The legacy and Aura Created by DDLJ will be forever unmatchable

The Most loved, popular and impactful movie Made in india #25YearsOfDDLJ#DDLJ25pic.twitter.com/fknpzIXx6O

Kajol's character Simran was an OG fashionista in every sense and she didn't even know. The green lehenga she wore in the Mehndi Laga Ke Rakhna or the matching tied-up shirt and skirt set she wore in Mere Khwabon Mein, all outfits are examples of her fine sartorial choices. How can we forget the big nerdy glasses, and the desi white outfit she wore while romancing Raj in the fields of Punjab as the signature DDLJ tune played in the backdrop. Some fans recreated her best looks from the film.

Instagram asked me to make a reel to celebrate #25yearsofDDLJ in partnership with @yrf and I recreated a few looks! Give it a watch! @iamsrk@itsKajolD#DDLJ25#DDLJpic.twitter.com/BBCFZ3wyUJ

Congratulations to #DDLJ for 25 years of magic #25YearsOfIconicDDLJ#DDLJ25pic.twitter.com/ql4M79Nln4

Wait, the love for DDLJ wasn't just confined to Twitter users. The microblogging and social networking site Twitter also paid tribute to the film in its own way. Remember the call that Amrish Puri gave while feeding the pigeons in the film? Twitter took a leaf from that scene and wrote: "Ao, Ao, Ao...we're celebrating 25 years of one of Hindi cinema's all-time great romances with a special emoji. Ring a cowbell? Tweet with #DDLJ, #DDLJ25, #25YearsOfDDLJ and #DilwaleDulhaniaLeJayenge."

DDLJ still runs to packed houses in the Maratha Mandir Theater in Mumbai.