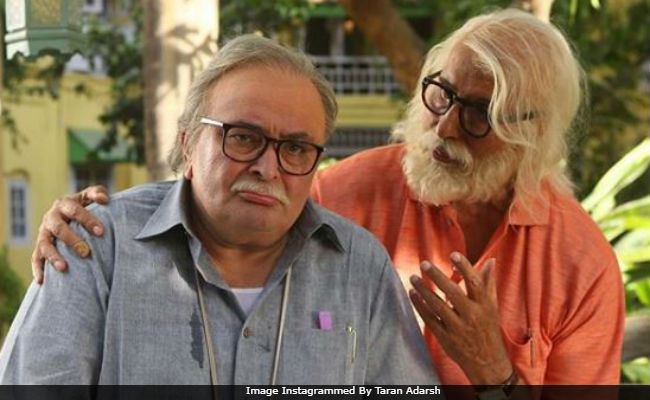 Amitabh Bachchan and Rishi Kapoor in 102 Not Out (Image courtesy: taranadarsh)

New Delhi: 102 Not Out, starring Amitabh Bachchan and Rishi Kapoor, might have opened to mixed reviews but at the box office, their film is doing a good business. On Sunday (Day 3), 102 Not Out witnessed 'superb growth,' trade analyst Taran Adarsh reports. On the opening day, the film earned Rs 3.52 crore and over the weekend, the collections went over Rs 13 crore. 102 Not Out has so far earned Rs 16.65 crore. "And 102 Not Out goes from strength to strength. Witnesses superb growth on Sunday. The upward trend and positive talk should help the film trend well on weekdays. Friday 3.52 crore, Saturday 5.53 crore, Sunday 7.60 crore. Total: Rs 16.65 crore. India biz," Taran Adarsh tweeted.

Here's the box office report of 102 Not Out.

In his review for NDTV, film critic Raja Sen gave 102 Not Out 2 stars out of 5. "The primary issue is that 102 Not Out is too static. This lack of dynamism is both physical and emotional, since the film never goes anywhere, except for the older man becoming more and more overt in his emotional manipulation," he wrote.

Promoted
Listen to the latest songs, only on JioSaavn.com
102 Not Out, directed by Umesh Shukla, is based on a Gujarati play written by Saumya Joshi.