Rishi Kapoor Had A 102 Not Out Reunion In New York. See Pic

"So much of love and affection," wrote Rishi Kapoor in his tweet 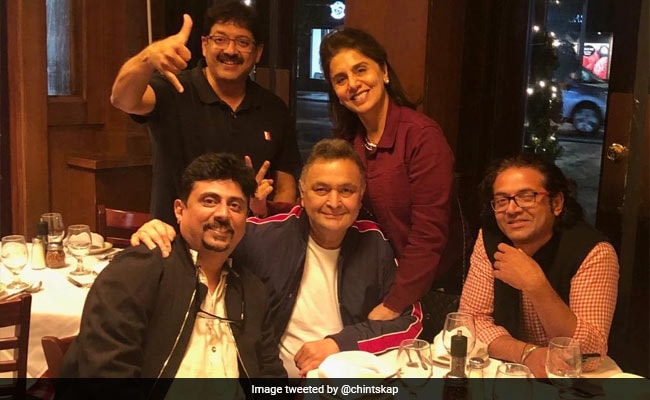 Rishi Kapoor with Team 102 Not Out in New York (Courtesy: Twitter)

Rishi Kapoor had more visitors in New York recently. The veteran actor recently tweeted a picture, which features 102 Not Out director Umesh Shukla, screenwriters Saumya Joshi (scriptwriter of 102 Not Out) and Abhijat Joshi and along with Neetu Kapoor. Sharing the picture, Rishi Kapoor wrote: "So much of love and affection. Umesh Shukla, Abhijat Joshi, Us with Saumya Joshi at "Tony's" Thank you 102 Not Out guys for your affection. We love you!" Rishi Kapoor, who has been in New York for over eight months, can be seen hanging out with Team 102 Not Out at a New York eatery in the picture.

Neetu Kapoor, who has been Rishi Kapoor's constant companion in the US during his months of treatment, posed with the victory sign.

Here is what Rishi Kapoor tweeted:

So much of love and affection. Umesh Shukla,Abhijat Joshi, Us with Saumya Joshi at "Tony's" Thank you "102 not out" guys for your affection we love you! pic.twitter.com/NrQD1Opzyt

Earlier this month, Nikhil Nanda visited Rishi Kapoor in New York. Nikhil Nanda is the son of Rishi Kapoor's sister Ritu Nanda. He married Amitabh Bachchan and Jaya Bachchan's daughter Shweta Bachchan in the year 1997 and they have two children. The post was shared by Neetu Kapoor on Instagram. Here is what she posted on Instagram:

My all time favorite @nikhil_nanda purest with a heart of gold !!! Can't find like him in a crowd of fake pple #asrealasrealgets

A list of celebs from the film industry have visited Rishi Kapoor in New York, which includes names such as Shah Rukh Khan, Deepika Padukone, Priyanka Chopra and Vicky Kaushal. Rishi Kapoor is also often visited by his actor son Ranbir Kapoor in the Big Apple.

Rishi Kapoor, who is in remission and is expected to return home soon, tweeted this last month:

The Bobby actor, last year featured in films like 102 Not Out, which also featured Amitabh Bachchan, Mulk and Rajma Chawal.

Rishi Kapoor102 Not Out