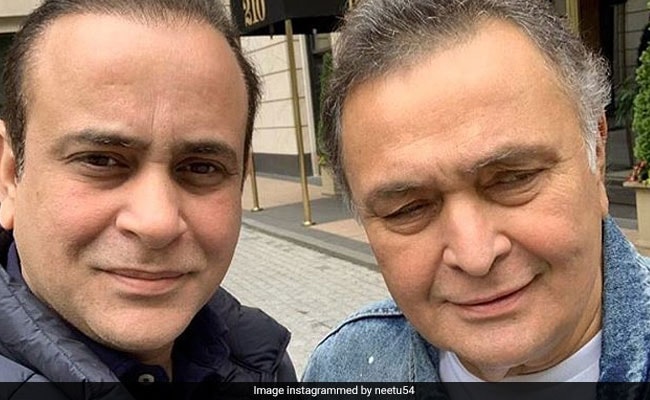 A picture of Rishi Kapoor and businessman Nikhil Nanda in New York is getting a lot of love online. Mr Nanda, who is the son of Rishi Kapoor's sister Ritu Nanda and has two children with Shweta Bachchan, was the 66-year-old actor's latest visitor in the Big Apple, where Rishi Kapoor has been for the last eight months getting treatment for cancer. The photo of the two men was posted by Mr Kapoor's wife Neetu who had the highest praise for Nikhil Nanda, who is rarely spotted at Bollywood events despite his film connections. "My favourite Nikhil Nanda. Purest with a heart of gold. Can't find like him in a crowd of fake people," Neetu Kapoor wrote. "Best," commented both Mr Nanda's brother-in-law Abhishek Bachchan and his cousin Riddhima Sahni, Rishi and Neetu Kapoor's daughter. See the post here:

My all time favorite @nikhil_nanda purest with a heart of gold !!! Can't find like him in a crowd of fake pple #asrealasrealgets

Rishi and Neetu Kapoor have received a steady stream of visitors from home while in New York, from the Ambanis to Shah Rukh Khan and Deepika Padukone. Just last week, they posted pictures with industrialist Pawan Munjal and designer Manish Malhotra.

Some pple just come to give you Assurance n Mental peace !!! Thank you mr and mrs Ambani for all the support #love #grateful

The language you have with your own fraternity is so easy !!! @manishmalhotra05 is always too much fun

Also last week, Rishi Kapoor posted a rather forlorn tweet asking, "When will I ever get home?"

In September last year, Rishi Kapoor announced in a tweet that he was "taking a short leave of absence to go to America for some medical treatment." He did not specify what he was being treated for - it was later revealed to be cancer.

Rishi and Neetu Kapoor were accompanied by son Ranbir to the US - Ranbir flew back home some months later and is currently filming Brahmastra with rumoured girlfriend Alia Bhatt, who has also visited the Kapoors in New York.

Rishi Kapoor recently told Deccan Chronicle that his cancer is in remission but that he needs a bone marrow transplant that has delayed his return home. In March, news agency IANS quoted a source as saying, "Rishi is homesick and very eager to return home. They have a wedding to plan. And he's counting the days. But he's not ready yet to return." The wedding in question promptly triggered speculation that Ranbir and Alia were getting married.

Rishi Kapoor, son of film legend Raj Kapoor, is the star of movies like Karz, Amar Akbar Anthony, Bobby, Sagar, Chandni and Laila Majnu. He and Neetu Kapoor made several hit films together, among them Khel Khel Mein and Rafoo Chakkar.