'Adorable Deepika Padukone': Rishi Kapoor And Neetu Had Another Visitor In New York

Take a look at how Deepika Padukone made Rishi and Neetu Kapoor's evening special. 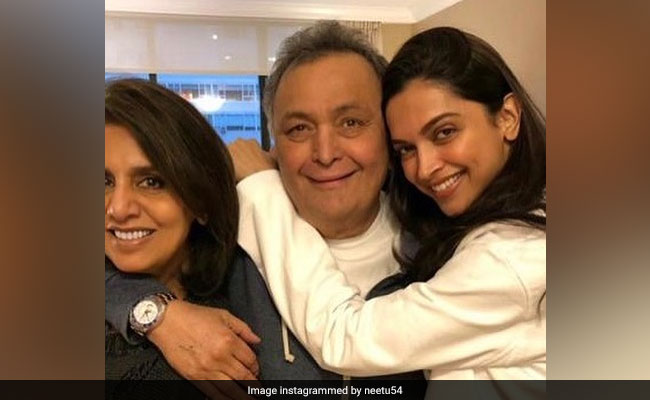 Met Gala done, what was next on Deepika Padukone's New York itinerary was a visit to Ranbir Kapoor's parents Rishi and Neetu Kapoor, who are also in the Big Apple. Neetu Kapoor shared glimpses of her meeting with the very "adorable" Deepika Padukone on Instagram and shared about how they bonded over the meeting: "Such a fun evening with adorable Deepika Padukone... gave lot of love and warmth," Neetu captioned an album full of pictures of herself, Rishi Kapoor and Deepika Padukone. Ranbir Kapoor's sister Riddhima Kapoor Sahni was one of the first ones to drop the heart emojis in the comments section.

Take a look at how Deepika Padukone made Rishi and Neetu Kapoor's evening special. Deepika Padukone is "adorable" indeed as she can be seen cutely hugging the veteran actor in the pictures.

When in New York, Rishi Kapoor has had visitors such as Aamir Khan, Shah Rukh Khan, Priyanka Chopra, Sonali Bendre, Anupam Kher and others. Rishi Kapoor, who has been battling cancer in New York for the past eight months, is now "cancer free" and is expected to be back home real soon. Talking about Rishi Kapoor's health at an event recent, Ranbir told IANS: "He is doing much better. Hopefully, he should be back in a month or two and his spirits are up and there is a lot of positivity in his behaviour."

Last week, Deepika Padukone sashayed down the Met Gala pink carpet looking like the diva she is. Meanwhile, Ranbir Kapoor and Alia Bhatt recently touched down in Mumbai from their trip to Europe.