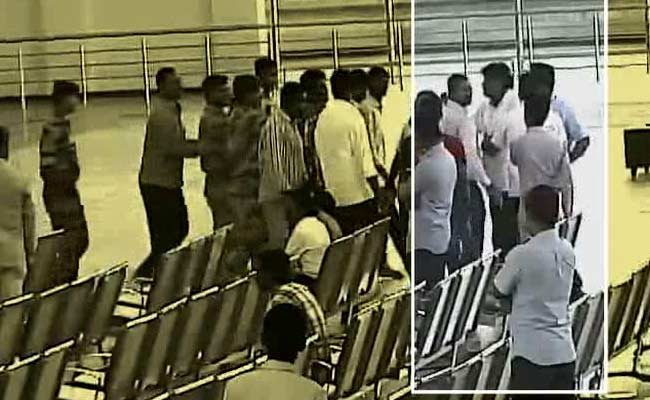 CCTV footage showed the manager being pushed around and threatened by the politician and at least a dozen of his supporters.

Mr Reddy, who belongs to the YSR Congress, allegedly slapped Air India manager Rajasekhar after he refused to issue boarding passes to his relatives for a flight to Delhi, saying they were late.

He has been sent to a jail in Nellore on 14-day judicial remand.

The 38-year-old parliamentarian who represents Rajampet constituency in Kadapa district had On November 26 come to see off YSR Congress chief YS Jaganmohan Reddy at Renigunta airport when the he had an altercation with Mr Rajasekhar.

The YSR Congress president had dismissed the accusations against the lawmaker as politically motivated. But CCTV footage showed the manager being pushed around and threatened by the politician and at least a dozen of his supporters.

Mr Rajasekhar's medical report said he suffered fractures due to the assault and termed his injuries as "grievous".

Mr Rajasekhar had complained that the lawmaker shouted at him before slapping him. Later, he alleged, Mr Reddy and some of his supporters barged into his cabin and misbehaved with him.

Mr Reddy was absconding ever since he was booked on charges of assault. He was returning from Bangkok last night along with another YSR Congress leader Madhusudan Reddy when immigration officials at Chennai stopped him and alerted the Andhra Pradesh police that had earlier issued a lookout notice for him.

The YSR Congress has alleged that several of its leaders in Chittoor have been placed under house arrest, following the arrest of Mithun Reddy.