"No Less Than God For Us": Andhra Family After Sonu Sood Gifts Tractor

Calling Sonu Sood a "hero in real life" the farmer, Nageswara Rao, said the actor helped their poor family immediately after he saw the video. 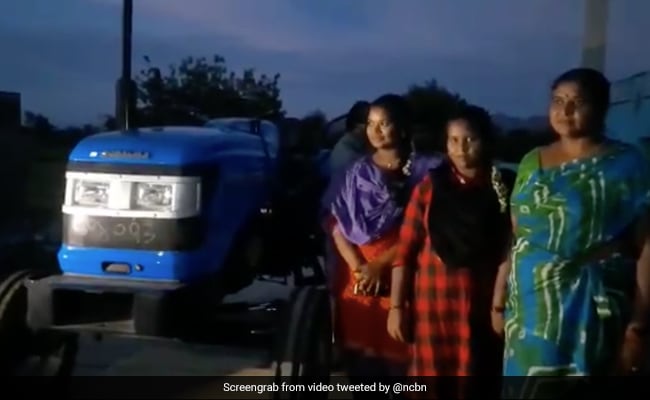 Sonu Sood gifted a tractor to a farmer in a remote village in Andhra Pradesh.

Bollywood actor Sonu Sood has gifted a tractor to a farmer from Andhra Pradesh's Chittoor district after a video of the farmer's young girls ploughing the fields with a yoke went viral on social media. Seeing their plight, Mr Sood, who has helped a massive number of migrant labourers stranded in cities to get home amid the coronavirus lockdown, came forward to help. The farmer and his family expressed their gratitude towards the actor saying that he is "no less than god" to them.

Calling Sonu Sood a "hero in real life" the farmer, Nageswara Rao, said the actor helped their poor family immediately after he saw the video.

"He might play a villain in films but he is a hero in real life. When we heard the reports of him helping thousands of migrant workers to reach their native states, we thought he is a real hero. We experienced it now. He is no less than a God to us," Mr Rao told news agency ANI.

In the video, the farmer's daughters - Vennela and Chandana - are seen tilling the land with a yoke. The family, struggling with poverty, could not hire a tractor or oxen to plough the land.

Sonu Sood had tagged the video on Twitter and wrote: "This family doesn't deserve a pair of ox. They deserve a tractor..."

This family doesn't deserve a pair of ox 🐂..
They deserve a Tractor.
So sending you one.
By evening a tractor will be ploughing your fields 🙏
Stay blessed ❣️🇮🇳 @Karan_Gilhotra#sonalikatractorshttps://t.co/oWAbJIB1jD

The family was left with no income after Mr Rao's tea stall, which he ran for 20 years in Madanapalle, had to shut down during the lockdown. Dejected, he had to return home to his native village around 70 kms away.

The girls said they wanted to provide for the family and thus started farming.

"We too wanted to do some agricultural work. But we had no much money. So all our family members are striving to do farm works. The matter went viral through media and social media. And Sonu Sood ji came to know about our plight. We thank him from our the bottom of our hearts," Vennela said.

After the video went viral, Mr Sood said the girls should be allowed to focus on their education and said he will help them with a tractor for farming.