Over 10 lakh graduates are eligible to exercise their franchise in preferential method at 1,530 polling stations. 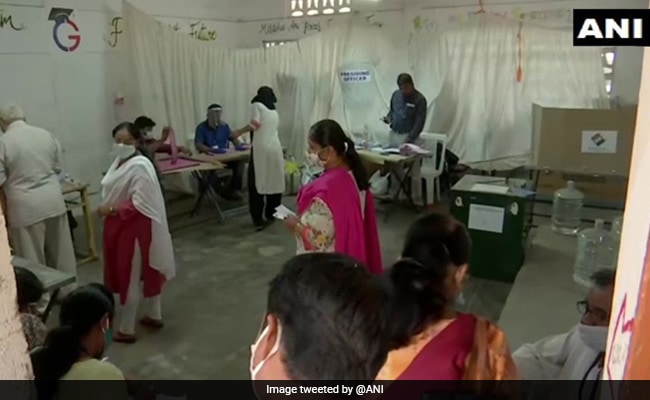 The counting of votes would be taken up on March 17.

Polling is underway on Sunday in the keenly-contested elections to Telangana Legislative Council from two Graduates' constituencies where former prime minister P V Narasimha Rao's daughter S Vani Devi fielded by the TRS and 163 other candidates are testing their fortunes.

Voting began at 8 AM and would continue till 4 PM for the Mahabubnagar-Rangareddy-Hyderabad and Warangal-Khammam- Nalgonda Graduates' constituencies which witnessed intense campaign by the ruling TRS, BJP, Congress, and others.

The TRS is keen to win the two seats following unexpected setbacks in the Dubbak assembly bypoll and Hyderabad civic polls late last year and deployed ministers, MPs, and other leaders for campaigning. BJP had won the Dubbak seat besides bagging a significant number of wards in the city polls.

As many as 93 candidates, including Vani Devi, are in the fray in the Mahabubnagar-Rangareddy-Hyderabad constituency, while 71 nominees are contesting in Warangal-Khammam-Nalgonda.

Jumbo ballot boxes and big-sized ballot papers are being used for the polling in view of a large number of candidates in the fray.

Over 10 lakh graduates are eligible to exercise their franchise in preferential method at 1,530 polling stations.

The campaigning for the election witnessed a war of words between the ruling TRS and opposition BJP and Congress.

In a surprise move, TRS fielded Vani Devi, an educationist, and artist, as its candidate from Mahabubnagar- Rangareddy-Hyderabad constituency, despite her late father's strong Congress roots.

TRS has been playing the son of the soil card and launched year-long birth anniversary celebrations of Narasimha Rao, who hailed from Telangana, last year besides seeking Bharat Ratna for him.

Sitting MLC and BJP leader N Ramachander Rao too put up a spirited campaign in the constituency while Union Minister of State G Kishan Reddy, BJP OBC Morcha national president K Laxman and other leaders also canvassed for him.

Chief Minister K Chandrasekhar Rao's son Rama Rao, who spearheaded the TRS campaign, accused the BJP-led NDA government of not implementing the promises made to Telangana when it was created by bifurcating Andhra Pradesh.

He also slammed the BJP for "not providing" two crore jobs in the country every year as promised.

The BJP sought to corner the TRS for allegedly neglecting the education sector and not providing jobs as promised, among others.

Telangana Jana Samiti (TJS) leader M Kodandaram is in the fray from the constituency.

The counting of votes would be taken up on March 17.

Twelve Teachers Of A School Found Coronavirus Positive In Telangana