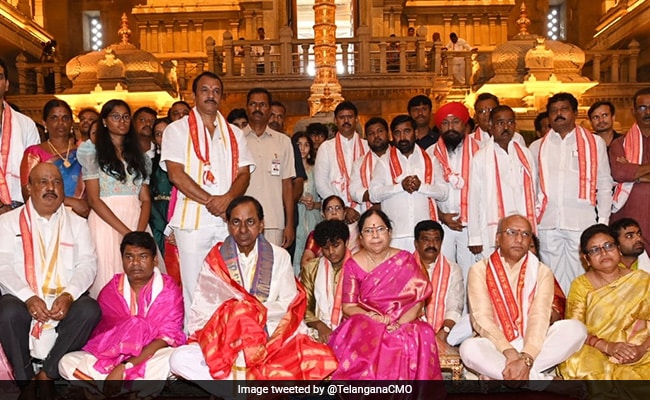 Telangana Chief Minister K Chandrashekhar Rao on Friday reviewed the development of the Yadadri temple with the Ministers and officials. He directed them to take necessary measures to ensure the constructions related to the temple complex are magnificent.

According to an official release, Mr Rao instructed the Finance Department to release Rs.43 crore for the development of Yadadri immediately and said the Revenue Department would hand over 2,157 acres of land to Yadagirigutta Temple Development Authority which would manage the lands.

He suggested that the land be used for temple needs, Police departments, fire station, health, transportation, parking, and ancillary services related to the development of Yadadri.

Also, he ordered the officials to allocate houses for Yadadri temple priests and the staff in the same land.

The Chief Minister ordered the development of 'Nrisimha Abhayaranyam' (thick forest) in 100 acres.

He further said a magnificent 'kalyana mandapam' (marriage hall) in the name of 'Ammavaru' would be constructed in 50 acres of land.

KCR, along with his wife and other family members, visited the temple and was welcomed by the temple priests with 'purnakumbha' and the Chief Minister and his wife participated in a special puja of the Lord Laksmi Narasimha Swamy.

On behalf of KCR's family, his grandson Himanshu presented silk clothes to the Lord.

KCR presented a cheque for one kg gold.