H Raja's outbursts came after police declined permission for taking out the idol procession through a particular route citing "a court order." 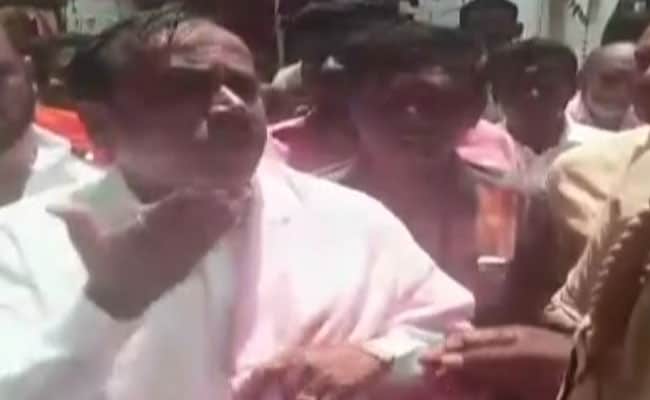 BJP national secretary H Raja picked up a fight with policemen in Tamil Nadu's Pudukkottai district on Saturday, during a Ganesh Chaturthi procession.

He was caught on camera fighting with the police officials who paved certain restrictions, during the procession. Opposition DMK today demanded action against him while the AIADMK government deprecated the BJP leader's remarks.

Mr Raja, known for stirring controversies by his remarks, engaged in a verbal duel with the policemen calling the force as "anti-Hindu" and "highly corrupt." His outbursts came after police declined permission for taking out the idol procession through a particular route citing "a court order."

A video clip that went viral on different social media platforms shows Mr Raja engaged in a heated argument with cops and accusing them of being corrupt. When the police officials, asked those participating in the procession to avoid crossing a sensitive area, the BJP leader lost his cool and started using abrasive language.

Raising strong objections to the orders, Mr Raja said, "Police have become too corrupt now, you all are taking bribes. You (Police) are anti-Hindu. If you torture a Hindu, you cannot be called one. Don't be their enemy."

"You are not allowing people to celebrate Pournami, I don't care about High Court or anything," he, further said.

He not only abused the police officials, but also spoke ill against their duties. "Are you all not ashamed of wearing police uniform? The entire state police has become corrupt. How can I stand on the ground and speak? I need a stage to speak."

DMK organising secretary R S Barathi, in a tweet today demanded the Tamil Nadu government to take legal action against Raja for his remarks against the policemen and judiciary.

Senior minister D Jayakumar deprecated the outburst against police said the government was considering taking action and holding consultations with legal experts. He also expressed hope that the court would take action on its own against Raja for his remarks against the judiciary.