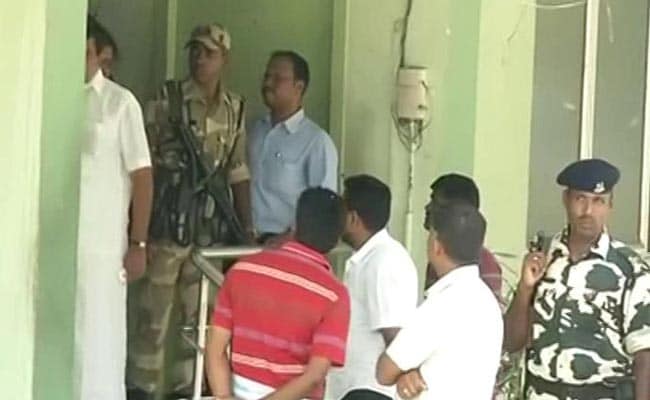 Chennai: The VK Sasikala faction of the ruling AIADMK had allegedly handed out 89 crore to voters to buy their support for Sasikala's nephew TTV Dinakaran pitted in next week's by-elections from Chennai's RK Nagar assembly seat, Income Tax officials have alleged, citing documents seized during Friday's raids in Tamil Nadu.

NDTV has accessed these documents, allegedly seized by tax officials during raids at more than 35 places including properties of the state health minister C Vijayabaskar.

One key document gives an alleged blue print of the strategy that divides the assembly seat into 256 segments. The target is to reach out 85 percent of the 2.6 lakh voters, with cash in hand. The party had kept aside  89.65 crores for the purpose. It works out to Rs 4,000 for each voter.

Seven senior leaders including Chief Minister Edapadi Palaniswami, Forest Minister Dindigul Sreenivasan and Finance Minister Jayakumar, were given targets. They were required to give the money to the voters in cash. For instance, Mr Palaniswami was responsible to distribute a sum of rupees 13.27 crore to 33,000 voters.

Sources told NDTV that the tax officials had shared their findings with the Election Commission of India. The Chief Electoral Officer Rajesh Lakhoni has left for Delhi. Ahead of assembly polls in Tamil Nadu last year, the Election Commission had postponed elections to three constituencies after large scale complaints of cash for votes and similar seizures.

The AIADMK's Sasikala faction has denied the allegations. "These are false allegations. Our late leader Amma has trained us to tackle such allegations," the party said. Minister Vijayabaskar said the IT department only "found 10,000 rupees at my house".

On Friday, tax officials said Rs 2 lakh was seized from Minister Vijayabaskar's home. Around five crore was the total haul from the minister and his associates.

Promoted
Listen to the latest songs, only on JioSaavn.com
Before going to jail, Ms Sasikala who heads the AIADMK faction that is in power in the state had named Mr Dinakaran as the party's deputy secretary general.

The April 12 election is crucial to the two factions of the AIADMK for more reasons than one. Both camps are fighting for Jayalalithaa's legacy. Mr Dinakaran's victory could elevate him as Chief Minister. His defeat could lead to a split in the party, strengthening the OPS camp or the DMK to form the government