Sheikh Hasina, the daughter of Bangladesh's founder, is almost certain to win a historic fourth term as prime minister when the country goes to the polls in its 11th parliamentary elections Sunday due to a decimated opposition. 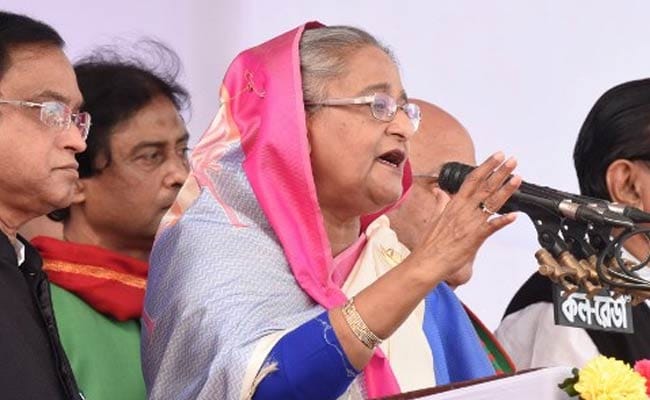 To her supporters, Sheikh Hasina is Bangladesh's "mother of humanity" for giving Rohingya refugees shelter, but to her detractors she's a creeping autocrat who has jailed opponents and muzzled dissent.

Hasina, the daughter of Bangladesh's founder, is almost certain to win a historic fourth term as prime minister when the country goes to the polls in its 11th parliamentary elections Sunday due to a decimated opposition.

The 71-year-old is lauded by supporters for overseeing a decade of impressive economic growth in the impoverished South Asian nation that was more commonly known for its frequent floods and cyclones.

Hasina was abroad in August 1975 when a group of renegade military officers assassinated her father, Bangladesh's first president Sheikh Mujibur Rahman, his wife and three sons.

She started her political career as a hero of the people, returning from exile in 1981 to take over as Awami League leader and begin a long struggle to restore democracy in Bangladesh.

Hasina joined forces with Zia's Bangladesh Nationalist Party (BNP) to help oust military dictator Hussain Muhammad Ershad in 1990 but the pair soon fell out and were branded the "Battling Begums".

Hasina was first elected prime minister in 1996 but she struggled to emerge from the shadow of her father during her first term and lost the 2001 contest.

The pair were then imprisoned on corruption charges in 2007 by a military-backed government which had taken power in a coup.

The charges were dropped and they were freed to contest the December 2008 election, which Hasina won by a landslide.

She has been in power ever since, presiding over economic expansion of more than six percent every year since 2009. GDP growth last year was 7.86 percent and Hasina has promised to take that into double digits if she retains power.

Under her watch, Bangladesh is on course to graduate from a least-developed country to a middle-income nation.

Poverty has been brought down to around 20 percent and nearly 90 percent of the country's 165 million people now have access to electricity.

Her fans also praise her for opening Bangladesh's doors to some one million Rohingya refugees fleeing a military crackdown in western Myanmar.

She has earned plaudits from western nations for allowing the refugees to stay in camps in Bangladesh's southeast, while her supporters insist she should be given a Nobel Peace Prize.

Hasina's fans have praised her for cracking down on Islamist extremists in the Muslim-majority nation, after five homegrown terrorists stormed a Dhaka cafe, killing 22 people -- including 18 foreigners -- in 2016.

She also launched trials of the powerful Islamist opposition over crimes committed during the 1971 independence war. Five top Islamist leaders and a main opposition stalwart were executed.

Her opponents branded the war crimes trials a farce, saying they were a politically motivated exercise designed to silence dissent. Instead of healing the wounds of war, the trials have triggered mass protests and deadly clashes.

Hasina showed similar resolve in holding the trial of her main opponent and two-time former premier Zia, who was sentenced to 17 years in jail in two separate graft cases earlier this year.

Analysts said the jailing has effectively ended Zia's political career and weakened the opposition ahead of the election.

They say Hasina's regime has slid into authoritarianism since she pushed on with an uncontested general election in 2014.

"She has crushed the opposition and created a one-party dominant political system in Bangladesh," says Ataur Rahman, a political science professor at Dhaka University.

Hasina married nuclear scientist M.A. Wazed Miah in 1968. They have two children, who are both US citizens, including son Sajeeb Wajed, who is an advisor to her government.

The 2018 election campaign has been marred by violence and arrests of opposition activists, and Hasina has ignored calls by her opponents to step aside and let a neutral government oversee the election.

She seems virtually certain to extend her reign as Bangladesh's longest-serving leader.