SBI Is Becoming The Air India Of Banking

When Gadfly suggested last year that Indian banks, hobbled by bad loans, should stop lending to preserve depleted capital, we didn't expect the country's largest lender to fall for the joke.

It has. On Friday, State Bank of India, which just became bigger after a merger with some smaller associated lenders, reported a meager 1.5 percent increase in loans outstanding at the end of the June quarter from a year earlier, practically hitting stall speed.

To the extent that credit growth at SBI is a barometer of animal spirits in the country, the message to investors is a somber one. At a price-to-earnings ratio of 23, the benchmark Nifty index is expensive; and given that SBI just earned a return on assets of 0.25 percent, bank shares look particularly frothy. 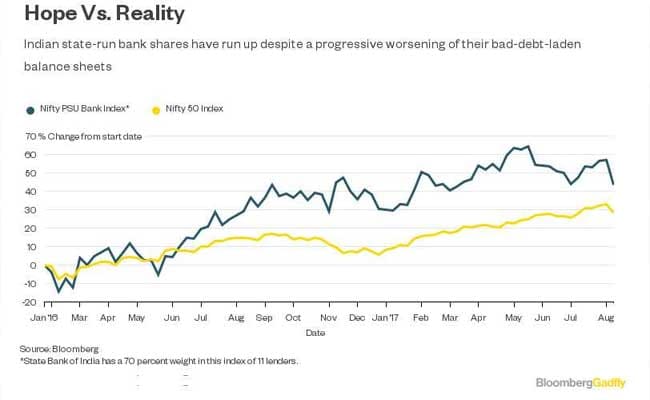 CEO Arundhati Bhattacharya inherited a miserable portfolio of dubious corporate loans, which post-merger have swelled to almost 10 percent of the total.

If that wasn't enough, Bhattacharya was knocked off balance by the deposit tsunami unleashed by the government's move to declare 86 percent of the country's currency illegal in one fell swoop last November. A 4 percent year-on-year increase in deposit costs during the quarter, combined with an 8 percent decline in interest income on advances, shows the squeeze she's facing.

To her credit, Bhattacharya managed to boost consolidated earnings by 436 percent. But nobody is going to even look at the measly 20 billion rupee ($312 million) profit number when SBI has yet to provide for 300 billion rupees out of its 500 billion rupees exposure to 12 soured large corporate accounts.

To this, add a spike in SBI's nonperforming agricultural loans, which could get worse if more Indian state governments resort to waiving distressed farm debt. SBI shareholders, including the government, should brace themselves for a long, dark night ahead. 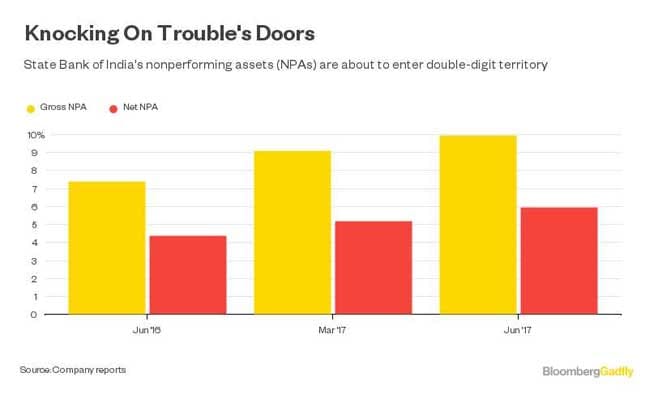 Retail lending is the only bright spot. Trouble is, more nimble, non-state-controlled players are thinking the same thing. With ICICI Bank Ltd. launching an instant credit card for pre-approved customers, SBI will have to focus its energy on a multi-cornered fight in home loans. The pressure on net interest margins, which have tumbled to 2.5 percent, will intensify as specialist SME lenders drive down yields further.

For a bank that gets 23 percent of India's domestic deposits without having to make much effort, not being able to lend profitably is frustrating. That's why SBI slashed rates on small savings recently without even waiting for the central bank to reduce its policy benchmark. By contrast, Kotak Mahindra Bank Ltd. jumped up and announced that it won't follow the SBI's lead because it values its relationship with the middle class.

Uday Kotak @udaykotak Borrowers matter so do savers. Kotak Mahindra Bank holds rates for savers upto 1 crore. 6% continues for saving between 1 lakh and 1 crore. Twitter: Uday Kotak on Twitter Lending is already toast. If the formidable deposit franchise also comes under pressure, then SBI will only exist as a parking lot for its 280,000 employees -- 70,000 more than before the merger. That'll make it the Air India Ltd. of banking -- a bloated state behemoth, minus the planes.