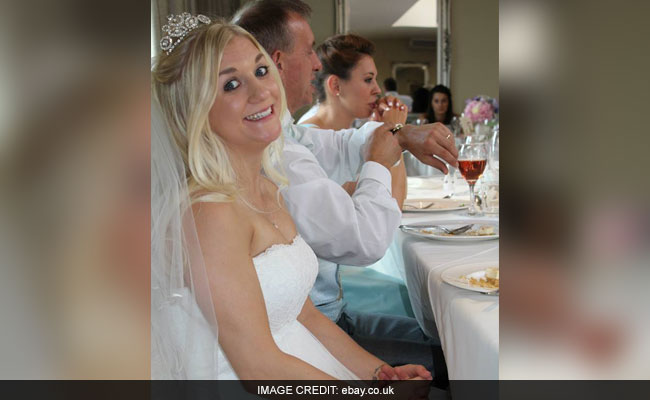 Samantha Wragg, from Chesterfield, wore the dress on her wedding in August 2014.

London: In a bizarre incident, a 28-year-old woman in the UK has put her designer wedding dress, worth 2,000 British pounds, up for sale on eBay to pay for her divorce after she found her husband was cheating on her.

Samantha Wragg, from Chesterfield, wore the dress on her wedding in August 2014. She claims her husband left her after 18 months and was already living with another woman, the Dailymirror reported.

Wragg, a blogger, is now selling her designer art deco wedding dress on eBay to help pay for her divorce, which she says her ex-husband "left her to foot the bill for."

She says the ivory, floor-length dress is a little dirty and will need to be dry-cleaned before it's worn again "to get rid of the stench of betrayal." She's had 12 enquiries, but no bids yet.

Samantha says the size six strapless gown, which has a long lace train and buttons down the back, cost her parents around 2000 British pounds brand new in 2014, but she's started the bidding at 500 British pounds.

"If you want a dress that is full of bad memories and shattered hopes and dreams then this is the one for you! Hope this dress brings you a lot more happiness than it brought me in the end and if not... well you can always sell it on here!, she further added.

If you've got any questions - either about the dress or the skank that my husband ran off with - then please feel free to contact me!, Wragg added.