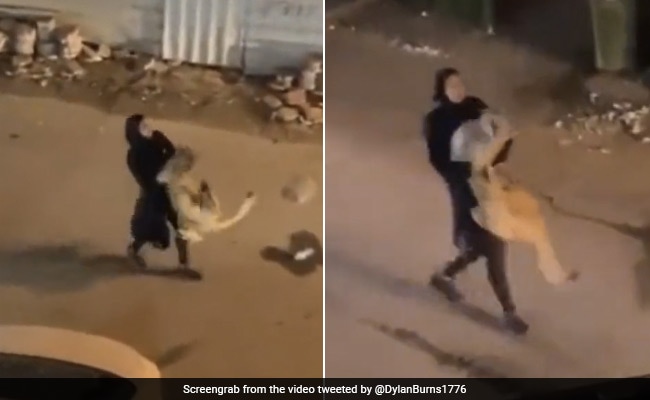 A Kuwait woman was filmed walking with a lion in her arms.

A viral video shows a woman carrying a lion in her arms on the streets of Kuwait. According to the Middle East Monitor, the pet lion sparked panic in Kuwait City after escaping from its enclosure and entering a residential area. Local authorities in the Sabahiya area received several reports of the big cat on the loose.

In footage that has gone viral online, a woman - said to be the lion's owner - was seen carrying it in her arms. The lion was filmed struggling to break free and heard growling as it was carried down the road. Watch the video below:

hate when this happens pic.twitter.com/laYa0FtSsI

The video has racked up over 4.5 lakh views on Twitter, along with hundreds of shocked comments.

Environmental police said that the lion belonged to the woman and her father, reports news website UPI. Officers helped in capturing the lion, after which it was returned to its owners.

Owning exotic pets like lions and tigers is illegal in Kuwait, but continues to be a common practice. Exotic pet owners often rely on their connections to ensure they are not penalised - but the trend of keeping lions, cheetahs, tigers and other predators as pets has been facing growing criticism from activists worldwide.

In 2018, authorities in Kuwait shared visuals of a huge lion wandering the streets. The big cat was captured and handed over to a zoo after being subdued with the help of a tranquiliser.