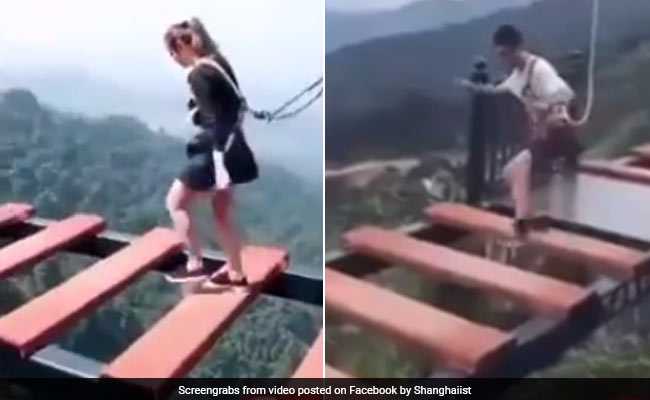 Can you tell who you identify with more?

A video, frightening for those afraid of heights, is currently doing the rounds of social media. It shows two people crossing a bridge at a huge height in two completely different ways. While one walks across it like a total boss, the other seems far less confident crossing it. Can you tell which of the two people you identify with more?

The bridge, shown in the video posted by Shanghaiist on Facebook, seems quite terrifying. If you think China's glass-bottom bridges are scary, picture this - this bridge has no railing and requires people to cross it by walking over a narrow path which resembles a ladder at best. A harness is attached to keep people safe, it seems.

The video first shows a woman crossing the bridge. She can be seen walking across it like a total boss with a devil may care attitude. Next, a man is seen trying to cross the bridge but he seems like the complete opposite of the woman.

The man looks visibly afraid having to cross the bridge and ends up crawling across it to make it to the other side. You've got to give him points for trying even after being that scared though.

"I give more credit to the guy. People are different, some have innate fears that are hard to control. He had that fear but yet pushed through it. That's tougher than not having the fear," says one Facebook user on the video. "I wouldn't even be able to scream. I'd be too terrified to scream. You'd literally have to drag me over the bridge and my body would probably go totally stiff from the very start," says another.

So, which of the two do you identify with? Tell us using the comments section below.Click for more trending news