Photo Of Woman Finishing Her Exam While In Labour Goes Viral 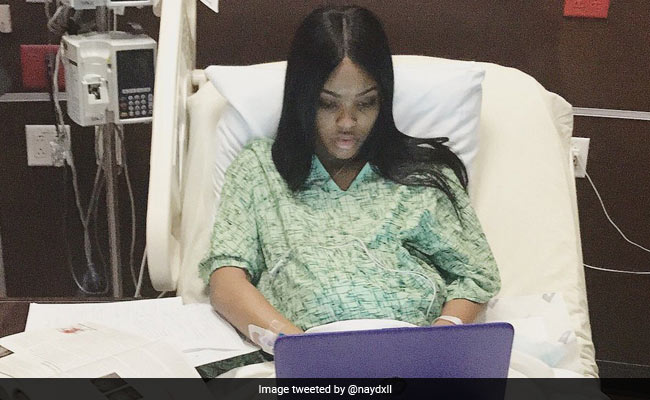 Nayzia Thomas has gone viral on social media for this picture.

If you thought your finals were tough, meet Nayzia Thomas. The new mum has gone viral on social media for a photograph that shows her writing her finals from a hospital bed as she prepares to give birth. On December 11, Nayzia shared a picture clicked by her mother which shows her typing away at her laptop as she prepares to deliver.

my mom took this pic & it's the perfect explanation of my life. yes i'm about to have a baby, but final SZN ain't over yet pic.twitter.com/7LyrDBE9iN

According to Yahoo Lifestyle, Nayzia studies psychology at Johnson County Community College in Kansas City, US, and she stayed in college until she was 39 weeks pregnant.

Her inspiring picture has gone viral with over 1.3 lakh 'likes' and over 27,000 retweets on Twitter.
"I was writing a research paper for psychology over the Dissociative Identity Disorder," Nayzia tells NDTV.

"It wasn't due until the end of the week... but my goal was to try to have everything done before," she tells Yahoo Lifestyle.

On December 12, after successfully completing her paper, Nayzia gave birth to a baby boy, Anthony Johnson.

update: on 12/12/17 we had a healthy baby boy. However, I experienced major blood loss & my body went into shock post-delivery. It was very scary, but his father was right there to take over when I went unconscious. We are blessed! AND I'm finishing the semester w/ a 3.5 GPA! pic.twitter.com/CLFGjf3hLD

And like the boss that she is, the new mum is finishing the semester with impressive grades.

On Twitter, people can't seem to get enough of this inspiring photograph.

Mad respect! my wife had our baby in between semesters and i've never seen strength like that woman has displayed. You and my wife are the embodiment of strength, determination, and perseverance. Congrats!

and I'm sitting here.. not pregnant.. in high school...overwhelmed. idk how you do it. respect sis.