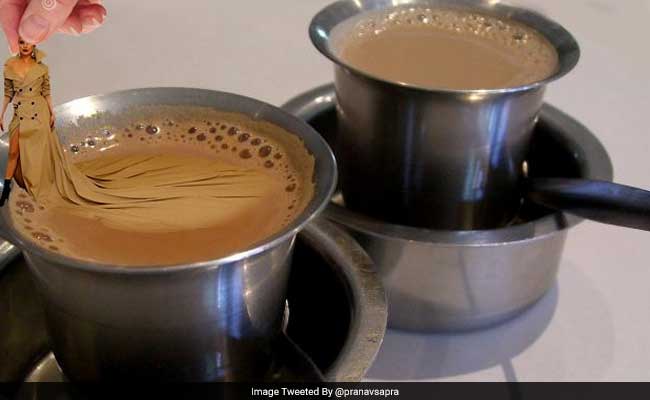 A look at some of the best Photoshop creations of Priyanka Chopras Met Gala dress.

NEW DELHI: All of yesterday, Desi GirlPriyanka Chopra's Met Gala outfit stopped major traffic on social media. The gorgeous actor stepped out on the red carpet dressed in a custom Ralph Lauren trench coat gown with a long train that quickly became social media's focal point of discussion. Reactions from people, some impressed others making jokes, had Priyanka Chopra trending on both Twitter and Facebook. But even as those reactions poured in, many were busy Photoshopping the Quantico actor's dress to showcase what they thought it represented.

From Aladdin's magic carpet to the vast desert to even malai on a forgotten cup of chai, people turned Priyanka's dress into a number of things. On Reddit, netizens even started a dedicated Photoshop Battle on the outfit.

So, here's a look at some of the best Photoshop creations out there.

Stop trolling Priyanka, she is protecting people from heat pic.twitter.com/aVwlA2DzsZ

And represented the various deserts of the world too

Have you guys always wondered where Mr. Perfectionist Aamir Khan shot the Guzarish song for Ghajini?

There were jokes about Priyanka's supposed overseas debut

Who said Baywatch is her first Hollywood Movie#PriyankaChoprapic.twitter.com/UdCidVCKwR

And also her next

Some edited scenes from the movie dangal. pic.twitter.com/KM9KgW9CdI

There were also some malai jokes

This is the 3rd time I'm removing malai from my chai and it's getting out of hand now. pic.twitter.com/kdeVf151Fj

Apparently, Egypt is merely a part of the outfit's long train

And finally this one. Ouch!

Meanwhile, when most of the Internet was busy using their skills to Photoshop Priyanka's outfit, one YouTuber hilariously parodied the overall fashion at the Met Gala. Quenlin Blackwell created some rather bizarre outfits using everyday objects like a broom, a cane basket and wine glasses, to spoof some of the outfits seen at the red carpet. Take a look.

I wasn't able to make it to The #MetGala but here are my outfits for the event!!..These looks took YEARS to create. pic.twitter.com/6jXnpRdTCB

Ms Blackwell's hilarious video has collected over two lakh 'likes' and more than 87,000 retweets on Twitter so far.

Promoted
Listen to the latest songs, only on JioSaavn.com
Tell us what you think about the fashion at the Met Gala using the comments section below.