"Throw a bigger one, it will move," the woman filming says, encouraging zoo-goers to throw bigger rocks at the tiger. 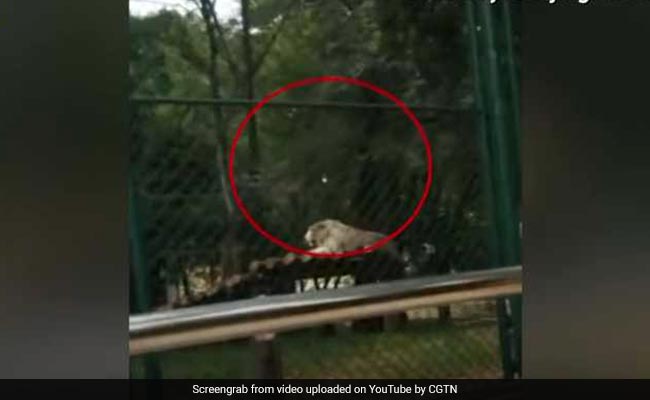 Caught on camera: Zoo-goers throwing small rocks at a tiger behind an enclosure in China

A horrifying video going viral on Chinese social media shows visitors at a wildlife park throwing rocks at a tiger in an enclosure. The woman filming is even prompts them to throw bigger rocks so the big cat will "move." The incident took place at the Beijing Wildlife Park on June 18, CGTN reports, quoting Beijing Youth Daily.

Footage posted on YouTube by CGTN shows people bending down to pick up handfuls of small rocks and throwing them at a tiger. One man can be seen throwing the rocks over the barbed enclosure and waiting for the tiger to react. "Throw a bigger one, it will move," the woman filming says, as translated into English by CGTN.

The video, which has gone viral on social media platforms in China, has invited widespread criticism. "Who should really be kept in an enclosure," asks one person. "These people should be on the zoo's blacklist," comments another.

This isn't the first time news of mistreatment of animals by visitors in China's zoos has made headlines.

Earlier this year, two separate instances of tourists chasing after and plucking peacocks' tail feathers were reported from zoos in China.

In another horrifying incident, bricks and concrete chunks were thrown at kangaroos by visitors to a zoo in southeastern China. Zoo-goers defended their actions saying they wanted the marsupial to hop.

Last year, horrified visitors to an animal park in eastern China watched as tigers killed a donkey that was thrown into their enclosure by investors angry over a business dispute related to the zoo. Click for more trending news