On Aarey, "No Further Cutting Of Trees Needed": Maharashtra To Top Court

Aarey Mumbai: On Sunday, 29 activists arrested during protests on Friday night as trees were pulled down following a court go-ahead were released on bail

No more trees are required to be cut to make way for a car shed of the Mumbai Metro in Aarey Colony, the Maharashtra government told the Supreme Court today. The top court was hearing the case after a group of students wrote to Chief Justice of India Ranjan Gogoi. On Sunday, 29 activists arrested during protests on Friday night as trees were pulled down following a court go-ahead were released on bail.

The ban on any gathering of four or more people that was imposed at Aarey when the protest broke out last week was briefly relaxed on Sunday night before it was reimposed this morning, ahead of the top court hearing. Only the residents are allowed to move in and out of Aarey.

A special bench of Justices Arun Mishra and Ashok Bhushan was set up after a group of law students wrote to the Chief Justice requesting that the top court intervene to stop the cutting of trees immediately.

On Friday, the Bombay High Court rejected petitions challenging the Mumbai civic body's Tree Committee order approving the cutting of trees in the colony to make space for Mumbai Metro's car shed in the area. Hours later, bulldozers rolled into Aarey, a green patch in north Mumbai that has shrunk over the years because of development projects. 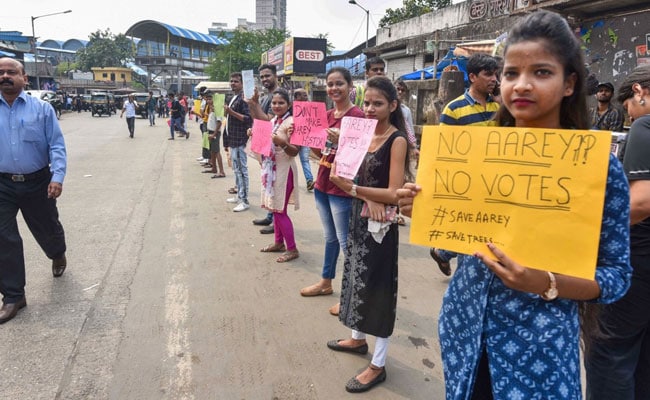 Aarey Colony: The activists claim the cutting of trees in the area is illegal (PTI)

The activists claim the cutting of trees in the area is illegal. As civic workers started cutting trees late at night, hours after the High Court order, the protesters were charged with obstructing and assaulting policemen and arrested.

A holiday court ordered their release on the condition that they post a bail bond of Rs 7,000 and not take part in any protest. The lawyer for the activists, who are mostly law students, argued in the bail plea that they have exams starting Monday.

The mother of one of the students, who had arrived at the police station on Sunday said: "Yes, it is a relief but only a temporary relief. The battle is long. I cannot say anything until my son reaches home".

Protests have been taking place against the construction of a car shed for the Mumbai Metro at the colony for two years. While several Bollywood stars have also echoed concerns, actors Amitabh Bachchan and Akshay Kumar have come out in support of the government, backing the metro project.

Uddhav Thackeray, chief of the BJP's coalition partner Shiv Sena, and his son, Aaditya have thrown their weight behind the activists. Prohibitory orders have been imposed in Aarey colony, banning large gatherings in the area.

Aarey Colony, a green belt in suburban Goregaon which has more than five lakh trees, together with Sanjay Gandhi National Park, is known as the green lung of Mumbai. The protests against cutting of trees also sparked Twitter campaigns and online 'petitions' such as #AareyChipko #SaveAarey.