Despite a rebuke from the Centre the first time, Rahul Gandhi again said he would strive to have a separate ministry for fisheries at the Centre. 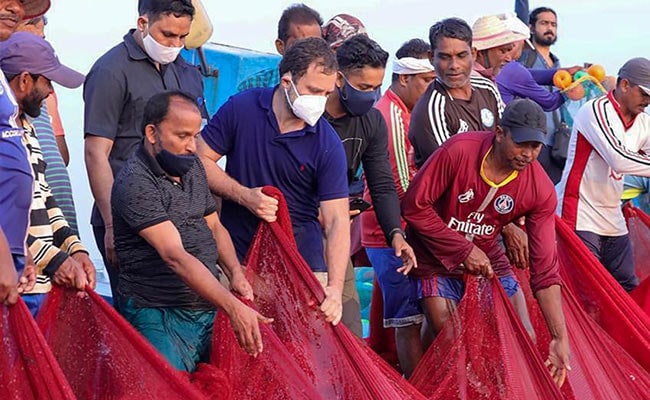 Rahul Gandhi, who is campaigning in Kerala ahead of polls, ventured into sea with fishermen (PTI Photo)

Seeking to reach out to the fishing community in poll-bound Kerala, Congress leader Rahul Gandhi today interacted with the fishermen at Thangassery beach in Kerala's Kollam district. During his interaction, Mr Gandhi again called for a separate fisheries ministry, despite being fact-checked by the Centre last week.

Rahul Gandhi, who had been touring the state for the last two days, also ventured into sea with fishermen in their boat.

After beginning his journey from Vadi beach in Kollam by 4:30 am, he spent nearly an hour with them before reaching the venue of the interaction.

He also cast the net and engaged in fishing along with them.

Clad in blue t-shirt and khaki trousers, the Congress leader could be seen waving hands to the onlookers from the boat while reaching back to the shores. Congress general secretary KC Venugopal and TN Prathapan MP, also chairman of National Fishermen Congress, also accompanied him during his sea journey.

Mr Gandhi also jumped into the sea and spent around 10 minutes swimming.

Mr Gandhi, who was accompanied by a personal security officer, jumped from the boat when he saw some fishermen jumping into the sea after casting their net to catch fish.

#WATCH| Kerala: Congress leader Rahul Gandhi took a dip in the sea with fishermen in Kollam (24.02.2021)

The fishermen also served him bread and fresh fish curry they prepared on the boat.

During the interaction, Rahul Gandhi said he always wanted to experience the life of fishermen.

"Early this morning, I went to sea with my brothers. From the moment the boat went and came back, they took the entire risk... their entire labour. They sought to the sea, buy the net and somebody else gets the profit," Mr Gandhi said.

"We tried to fish but got only one. Even with this investment, the net came back empty. This was my experience," he added.

Despite a rebuke from the Centre the first time, Rahul Gandhi again said he would strive to have a separate ministry for fisheries at the Centre.

"Just like our farmers farm the land, you farm the sea. Farmers have a Ministry in Delhi, you don't. No one speaks for you in Delhi. The first thing I would do is to have a ministry dedicated to the fishermen of India so that your issues can be defended and protected," Rahul Gandhi claimed in Kollam.

Addressing fishermen on a recent visit to poll-bound Puducherry, Rahul Gandhi had called them "farmers of the sea" and talked about the need for a separate ministry for fisheries. Except there already is one, Union Fisheries Minister Giriraj Singh and several other BJP leaders had pointed out.

While the comment drew applause from the crowd in Puducherry last week, it was not long before Rahul Gandhi was fact-checked by BJP leaders, especially the Minister for Fisheries, who even tweeted in Italian a comment roughly translated as: "Dear Raul, there is no separate Ministry of Fisheries in Italy. It comes under the Ministry of Agricultural and Forestry Policies."

Giriraj Singh had also taken a swipe at the Congress leader''s ignorance and attempt to "spread misinformation". "Rahul Gandhi is unaware that a separate ministry for fisheries, animal husbandry and dairying was formed by the Prime Minister in 2019, adding that Gandhi can't come out of Italy," the Minister had said.

Union Minister Kiren Rijiju was among those who criticised the Congress leader on Twitter.

Rahul Gandhi went on to say that the UDF leaders in Kerala would soon hold discussions with the fisherfolk to prepare a separate manifesto for them during the impending assembly polls.

Taking a dig at the LDF government apparently over the ongoing controversy related to the alleged deep sea fishing contract, the Congress leader said he would like to see what they were going to do with the trawlers.

"I am for competition...but not for unfair competition. So, there should be a level playing filed for everyone," he added.

Rahul Gandhi's interaction with the fishermen assumes significance as the Congress-led UDF has raised allegations against the Left government in the state over an alleged deep sea fishing contract with a US-based company.

In the wake of the controversy, Chief Minister Pinarayi Vijayan had directed the officials concerned to cancel the MoU between EMCC, the US-based firm and Kerala State Inland Navigation Corporation (KSINC), a public sector undertaking and probe the circumstances under which it was signed.