The apartment where 10,000 voter ID cards were found in a flat is located in the Raja Rajeshwari Nagar constituency of Bengaluru, one of the 223 constituencies where voting will be held. 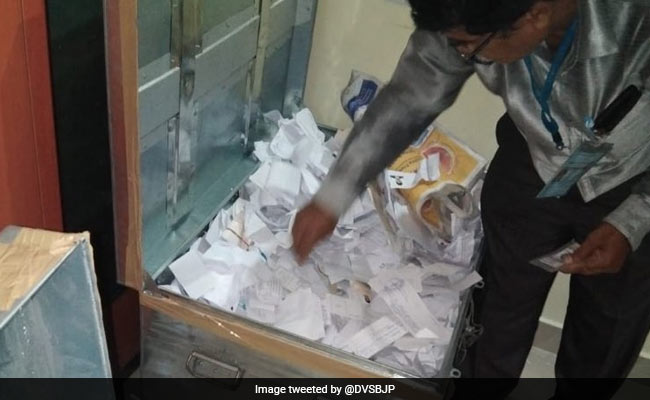 Bengaluru, Karnataka: A day after nearly 10,000 voter ID cards found in a Bengaluru apartment generated a new political flashpoint ahead of the Saturday Karnataka election, sources in the Election Commission called the BJP's demand for cancelling voting in the area "far-fetched" and not possible. "People can vote even without voter IDs by showing other proof. So just because 9,000 cards were found in that flat it doesn't warrant countermanding of polls in Rajarajeshwari Nagar," said a source.

Since last night, the BJP and the Congress have been trading allegations of cheating and trying to manipulate the election. Both claim Rakesh, the man who reportedly alerted the BJP to the ID cards, is close to the other party. The apartment under scrutiny belongs to Manjula Nanjamari and her son Sridhar; both say they knew nothing about what was happening inside.

The Congress says Manjula Nanjamari is a former BJP corporator, but the BJP denies any links with her. Manjula and her son Sridhar confirmed to NDTV that Manjula had been a BJP corporator and that they were still very much BJP supporters although not as active as earlier.

The BJP says it first went to the flat on Tuesday evening after being tipped off by Rakesh. Four hours later, the police and election officials went in and seized five computers, a printer and tens of thousands of voter list forms, says Sridhar.

Karnataka's Chief Electoral Officer Sanjiv Kumar said the IDs appeared to be genuine but there were also two trunk-loads of counterfoil strips, which appeared to be acknowledgement slips from the form used to add names of voters, but were not in the official colour.

Union minister Prakash Javadekar alleges that Congress lawmaker Munirathna Naidu, contesting again in the constituency, is behind the alleged racket.

Prime Minister Narendra Modi, who was campaigning in Karnataka, attacked the Congress at a rally. "Thousands of voter ID cards were seized, 1 lakh voters slips were seized in just one place. They must have planned such games in 40-50 constituencies. You (voters) be alert. Such sin cannot be allowed during the celebration of democracy (polls)," he said.

Promoted
Listen to the latest songs, only on JioSaavn.com
Accusing the BJP of staging the incident, Congress's Randeep Surjewala said: "Is this the new law? That the BJP will check wherever they want?

Raja Rajeshwari Nagar is one of the larger constituencies in Bengaluru and has about 4.71 lakh voters. In 2013, the seat had gone to the Congress's Munirathna, who bagged a 37 per cent vote share. Munirathna, seeking re-election, is pitted against the BJP's Muniraju Gowda PM who put out a video of his search on Facebook.