Jayanagar Election Result: The Assembly elections were held across Karnataka on May 12, but polling in Jayanagar in south Bengaluru was deferred because of the death of BJP candidate BN Vijayakumar.

Bengaluru: The Congress's partnership with the Janata Dal Secular won it one more seat in Karnataka today. The party snatched the Jayanagar constituency from the BJP by a wafer-thin margin.

Congress candidate Sowmya Reddy defeated her BJP rival by less than 3,000 votes in the polls held on June 11, nearly a month after the rest of the state voted. She becomes the only woman lawmaker in Bengaluru.

The narrow margin was seen as proof that the support of Chief Minister HD Kumaraswamy's Janata Dal Secular helped the Congress edge past the BJP. It serves as another reminder that joining forces against the BJP can be a winning strategy.

Had the JDS not pulled out its candidate and formally backed its coalition partner Congress just days before the vote, the BJP had a chance to retain the seat.

The win takes the Congress tally in the assembly to 79 and that of the ruling coalition to 119 in the 224 member assembly. 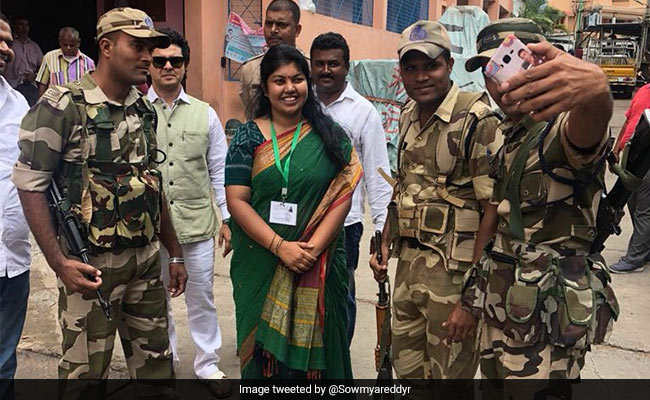 Sowmya Reddy becomes the only woman lawmaker in Bengaluru.

Assembly elections were held across Karnataka on May 12, but polling in Jayanagar in south Bengaluru was deferred because of the death of BJP candidate BN Vijayakumar, who represented the seat.

The BJP fielded Mr Vijayakumar's brother BN Prahlad. The Congress's Sowmya Reddy is the daughter of senior leader and former home minister Ramalinga Reddy, who has represented the seat four times. "I have contacts with the people here. That helped me in the elections. She didn't win because she is my daughter. Party is also important. And also last minute, JDS supported her," Mr Reddy said.

Sowmya Reddy told NDTV, "I will thank Kumaraswamy sir and of course my party."

The two parties have said they will extend their partnership to the 2019 national election.

The BJP said it was not worried by any threat from the coalition. Spokesperson, S Prakash, told NDTV, "Our candidate was very new to the election arena. The margin was very thin. Little more effort from our end, we would have won the election. Ramalinga Reddy with his vast experience and the money power still could not win convincingly. If the combination had been a hit, they would have won by 10 to 15,000 margin. But here they have won only by 2,800 which is insignificant. BJP is well geared up to face any challenge in the coming days."

This is the first election that the Janata Dal Secular and Congress fought on the same side since they formed an alliance to take power in Karnataka. The two had fielded candidates against each other, despite being coalition partners, in the recent election to the Rajarajeshwari Nagar Assembly seat in Bengaluru. The Congress candidate, Munirathna, won the seat, leaving the JD(S) a distant third behind the BJP.

Promoted
Listen to the latest songs, only on JioSaavn.com
BJP candidate BN Prahlad told NDTV, "Close victory for them. Close defeat for us. In a democracy, defeat and win we have to take in the right spirit."

Mr Kumaraswamy, whose party was third in the election, was sworn in as chief minister on May 24. The BJP, which emerged the single largest party, failed to raise the numbers needed to form government and its leader BS Yeddyurappa resigned after three days as chief minister.