With Leaders of 12 Parties, Kumaraswamy Turns Oath Into Opposition Meet 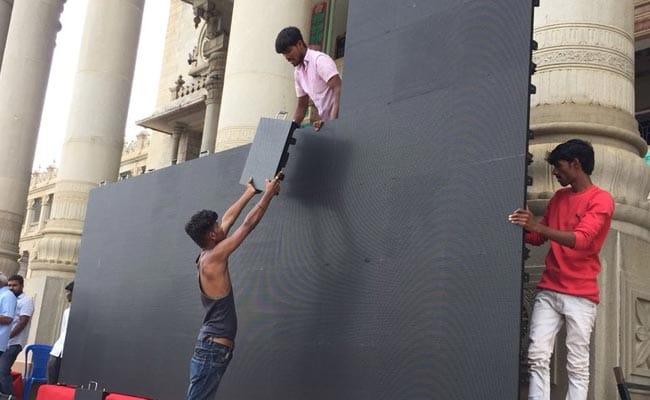 New Delhi: More than a dozen opposition leaders will be attending the oath ceremony of HD Kumaraswamy, who takes over as the Karnataka Chief Minister tomorrow, pending a floor test. The mega gathering is seen as a show of strength by the opposition, which is yet to put forth a cohesive effort to stitch up a united front to take on the BJP in next year's general elections.

In between his frequent temple runs over the last three days, 58-year-old Mr Kumaraswamy has managed to draw up an extended guest list, which includes five chief ministers and senior leaders from most key opposition parties.

After the results in Karnataka threw up a split verdict and the Congress and Mr Kumaraswamy announced a tie-up to take a shot at power in the state, many of these leaders had called and tweeted to show support.

Yesterday, Mr Kumaraswamy flew down to Delhi to personally invite Rahul and Sonia Gandhi, leaders of ally Congress in Karnataka. At the meeting, the three talked of a forward-looking broader alliance. It is not known yet whether Sonia Gandhi will attend the event, but Rahul Gandhi accepted the invitation with a cordial tweet:

I had a warm and cordial meeting this evening, in Delhi, with Shri H D Kumaraswamy ji. We discussed the political situation in Karnataka and other matters of mutual interest. I will be attending his swearing in as CM of Karnataka, on Wednesday, in Bengaluru. pic.twitter.com/sZAwX8mQut

The Janata Dal Secular chief did not meet Sitaram Yechury, but he touched base with the CPM general secretary on telephone. "I said there is no need for formality. I will attend it (the ceremony) in Bengaluru on May 23," Mr Yechury later told reporters.

The last such gathering had taken place during a dinner hosted by Sonia Gandhi during the budget session of parliament. Leaders of 19 parties had attended. Congress chief Rahul Gandhi called it an opportunity to "meet and bond" and tweeted later about "tremendous positive energy, warmth and genuine affection".

This time, the Gandhis' gesture of taking a backseat in the Karnataka alliance and allowing the smaller, regional party take the point, is seen as signaling their wholehearted commitment to challenge the BJP. For leaders like Mamata Banerjee, who want recognition for regional parties and aspirations, it has opened up possibilities of establishing fresh equations.

Promoted
Listen to the latest songs, only on JioSaavn.com
Odisha chief minister Naveen Patnaik, though, is skipping the occasion. Telangana Chief Minister K Chandrasekhara Rao, who is planning a non-Congress, non-BJP front, will skip the function as well. But he visited Bengaluru this evening to meet Mr Kumaraswamy.

The BJP will not attend the swearing-in at Bengaluru's Vidhan Soudha -- its leaders will observe a protest day tomorrow.