The SSC CGL notification will be released on the official website of the Commission, ssc.nic.in.

SSC CGL notification 2019: The advertisement will be released at ssc.nic.in.

SSC CGL 2019 notification: Staff Selection Commission (SSC) is expected to release the SSC CGL notification 2019 today. According to the recruitment calendar released by the Commission, the detailed advertisement of this year's Combined Graduate Level (CGL) Tier 1 exam on October 22 and the candidates will be allowed to register for the recruitment process held for jobs in Central government offices till November 22. The SSC CGL Tier 1 exams for this year's notification will be held from March 2 to 11 next year. The SSC CGL notification will be released on the official website of the Commission, ssc.nic.in.

The Commission will hold SSC CGL exam as a Computer-Based exam in March.

Last year, the SSC CGL notice was released in May. The exams, for selection to CGL posts, began a year after the recruitment was notified.

SSC is yet to release the final result of SSC CGL 2017 exam, though it has tentatively fixed the result date on November 15. The CGL 2018 selection process is underway and the Commission will be releasing the result for CGL Tier II exam 2018 on October 25, according a status report. 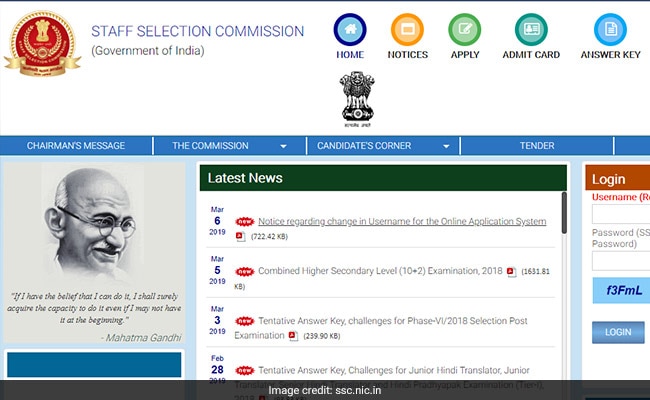 SSC CGL notification 2019: The details will be released at ssc.nic.in

CGL is held annually for filling up Group 'B' and Group 'C' posts in various ministries/ departments/ organizations in the Government of India.

SSC selects candidates for appointment on the basis of computer based test, descriptive paper test and skill test. The computer based test which will be held in two tiers would assess the academic merit of the candidate. The difficulty level of the questions would range from matriculation level till graduation level.

CGL exam registers one of the higher participations among all the other exams conducted by SSC. In the CGL 2018 tier 1 exam, held in June this year, 8.37 lakh candidates out of 26 lakh registered candidates participated.

Candidates with a bachelor's degree from a recognized university can take the exam.