Yeti footprints: Wildlife experts have also conformed to this saying they were bear footprints enlarged by the sun and wind. 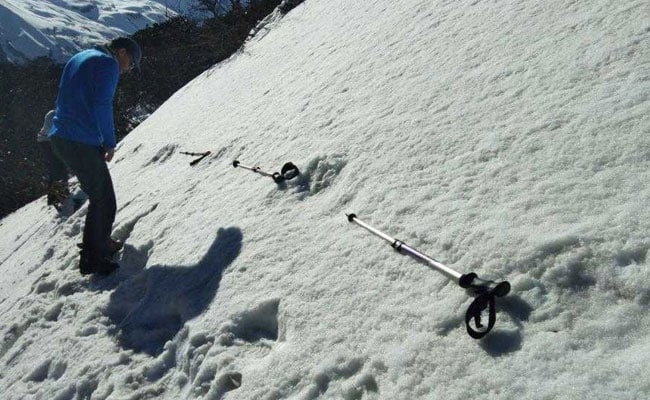 Nepal Army has today refuted the Indian Army's claims that their soldiers had spotted footprints of the mythical beast Yeti in the Himalayas, saying they were more likely just a bear.

Nepal Army spokesman Bigyan Dev Pandey said by the time their liaison officers arrived the markings in the snow had disappeared.

Mr Pandey also said locals have supported the bear claims as strange prints were often seen in the area, which were mostly made by wild bears.

Wildlife experts have also conformed to this saying they were bear footprints enlarged by the sun and wind.

"Coming from the Indian Army, this claim of finding the Yeti deserves a degree of attention. In the natural world, mysterious things do occur. However, unless proved with evidence and backed with a credible scientific publication it is best left as an amateur speculation that needs to be debated further," Dr Apte told NDTV.

The Indian army had posted images of "Yeti footprints" late on Monday on Twitter, which they had across on an expedition close to the Makalu Base Camp in Nepal on April 9. The footprints measured 32x15 inches long, according to the Army.

The claim drew considerable ridicule from many on Twitter, including the army's 6 million followers.

"Couldn't you guys call a single animal expert before posting this?" one person wrote.

Others were simply confused, asking: "Is this some prank?"

The Yeti or "Abominable Snowman" is traditionally described as an ape-like creature, taller than a human, living in the Himalayas, Siberia and parts of Central and East Asia. The North American version is known as Bigfoot. Such footprints were last reported by British explorer Eric Shipton in 1951 on the west side of Mount Everest.

Forensic results of previous samples have proved to be from prehistoric bears. A 2017 study of bone and fur samples attributed to Yetis showed they were from brown or black bears.