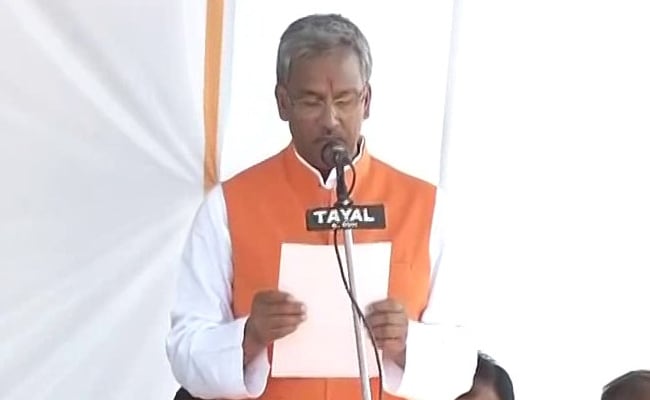 Trivendra Singh Rawat is the ninth Chief Minister of Uttarakhand.

Dehradun: Trivendra Singh Rawat, the new Uttarakhand Chief Minister, has been a long-time RSS pracharak. Widely regarded for his organisational skills within the Bharatiya Janata Party, Mr Rawat has worked closely with BJP chief Amit Shah in Uttar Pradesh during the 2014 Lok Sabha elections. His swearing-in ceremony, on Sunday, was attended by Prime Minister Narendra Modi and Mr Shah. In recently-concluded assembly elections, BJP won 57 of Uttarkhand's 70 seats, decimating Congress on the way, which ruled the state for the last five year with Harish Rawat at the helm.

Below, we take a look at Trivendra Singh Rawat's profile and his journey into politics:

Who is Trivendra Singh Rawat?

Trivendra Singh Rawat was born on 20 December, 1960, in the village of Khairasain, Pauri, Uttarakhand. Son of a retired Army man, he is the youngest of nine children. He has eight brothers and one sister (who passed away). Mr Rawat is a postgraduate in journalism.

Mr Rawat's wife is a government school teacher. He has two daughters - one pursuing fashion design and another studying law.

A former Rashtriya Swayamsevak Sangh (RSS) pracharak, Trivendra Singh Rawat has worked closely with Prime Minister Narendra Modi and was the Agriculture Minister in the previous BJP government in Uttarakhand, which was carved out of Uttar Pradesh in 2000.

Mr Rawat has worked as Amit Shah's deputy in Uttar Pradesh during the 2014 Lok Sabha elections, when the BJP and its ally Apna Dal swept 73 of the 80 Lok Sabha seats in the state.