Goonda Raj To Return If Akhilesh Yadav Forms Government In UP: Amit Shah

Amit Shah stressed that the BJP has run the government in a transparent manner in Uttar Pradesh and even political adversaries cannot accuse them of corruption. 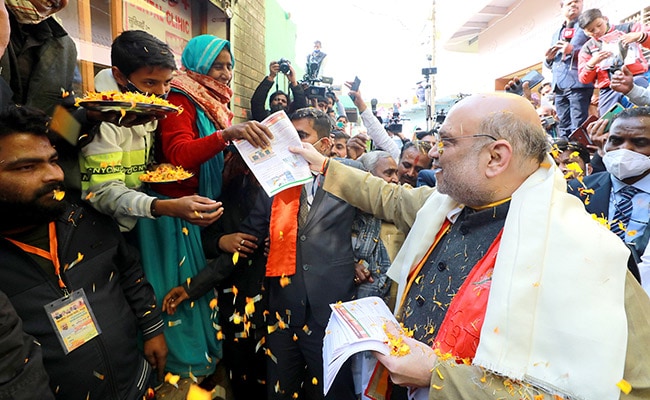 UP polls: Amit Shah said that if the BJP returns to power in UP, it will bolster development.

Addressing "influential voters" during a door-to-door campaign, he also accused the Samajwadi Party (SP) and the Bahujan Samaj Party (BSP) of promoting dynastic politics and casteism.

Mr Shah paid obeisance at the Banke Bihari temple before starting his door-to-door campaign for the state Assembly polls.

"Azam Khan was arrested and CrPC sections fell short under which cases were lodged against him," he said referring to a Samajwadi Party leader.

He mocked Akhilesh Yadav of his criticism of law and order, says he has not right to complain about it.

"Akhilesh babu you question law and order, you should drown in chullu handful of water. You have no right to speak on it," he said targeting the Samajwadi Party leader.

If Akhilesh Yadav comes to power, the "goonda raj" (rule of goons) will prevail, he claimed attacking the opposition party.

But if the BJP returns to power, it will bolster development, he said.

The union minister stressed that his party has run the government in a transparent manner and even political adversaries cannot accuse them of corruption.

"Before the BJP, the state has seen SP and BSP governments, which worked for specific castes. None of them drew the plan of all-round development of the state. It was done by the governments led by (PM) Narendra Modi and (Chief Minister) Yogi Adityanath," he said.

"The BJP is not the party of a particular caste but the entire society," he claimed, adding that in the 2017 Assembly polls, people have rejected casteism and dynastic politics.

"But in the past seven years of the Modi government and Yogi Adityanath rule, even Rahul baba cannot level the charge of corruption," he said referring to Congress leader Rahul Gandhi.

"Akhilesh babu stacks of notes are coming out from the houses of your supporters but there is no charge of corruption against the BJP," he said, apparently referring to the seizure of cash and jewellery from two perfume traders in Kanpur and Kannauj.

He also took a swipe at the SP's promise of free power, saying why wasn't it done earlier.

He claimed his party worked for places of worship without caring for vote bank, citing the construction of Ayodhya's Ram Temple and the Kashi Vishwanath corridor in Varanasi.

Earlier, accompanied by party leaders, the minister distributed pamphlets in Satua village near Govardhan Road and got his photographs clicked with local workers.

Amidst showering of petals by women, he was seen garlanding a beaming child in a woman's lap.