Chandrika Rai hinted that his daughter might contest the coming assembly polls. 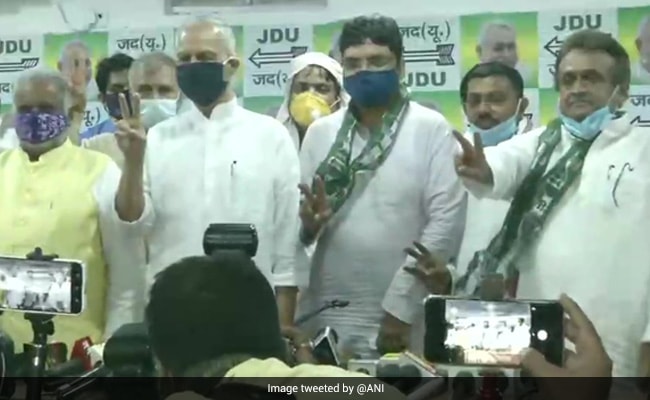 The main opposition RJD on Thursday received yet another jolt ahead of the polls when its three more MLAs including old-timer Chandrika Rai, whose daughter is locked in a nasty marital dispute with Lalu Prasads son, joined the ruling JD(U).

Mr Rai hinted that his daughter might contest the coming assembly polls.

He, however, did not specify the name of the RJD leader against whom his daughter Aishwarya would contest polls, but asserted that there is no "safe seats" for both brothers- Tejashwi Yadav and Tej Pratap Yadav- in the state.

The matter is pending with a Patna court. Apart from Mr Rai, the other two RJD MLAs who embraced JD(U) are- Jai Vardhan Yadav, the Paliganj (Patna) MLA and grandson of former union minister and famous Yadav leader Ram

Mr Fatmi is the son of the former union minister Mohammad Ali Ashraf Fatmi, who had quit the RJD during 2019 Lok Sabha elections after he was denied ticket.

The three joined JD(U) in the presence of senior party leaders and ministers, Bijendra Prasad Yadav and Shrawan Kumar, in the party office here.

The RJD had expelled its three legislators from the party for six years on charge of anti-party activities on August 16. RJDs strength is 80 in the Bihar assembly but the number has come down by six in just four days and media reports suggest that many more legislators may leave the party to join other parties especially NDA ahead of the polls expected in October-November.

Welcoming the newly inducted leaders in the party, Bijendra Prasad Yadav said that JD(U) would be further strengthened with their arrival.

All the three MLAs, who crossed over to the JD(U), reposed faith in the leadership of Nitish Kumar saying, his development work has inspired them to join him for the development of the state.

Chandrika Rai, who is the son of Late Daroga Prasad Rai, a Congress veteran who had served as the chief minister of Bihar in the 1970s, said that he had already made it clear that he would leave the party and join Kumar's party as and when he says so.

Asked whether his daughter Aishwarya will contest assembly elections, Mr Rai, who represents Parsa constituency in Saran district, said that "so far as contesting elections are concerned, anyone who is above 25 years old,mentally sound and is not a bankrupt can contest elections.

"She (Aishwarya) can also contest but there is no such thing as of now.

He said that he is interested in knowing from which constituency both brothers (Tejashwi Yadav and his elder brother Taj Pratap Yadav) would contest polls.

When pointed out whether he meant to say that his daughter would contest from the constituencies from which the Yadav brothers would enter in the fray, Mr Rai made it clear that

"I am not saying so, but there has been speculations in media whether Aishwarya would contest or not. She may or may not contest election.

"It is quite surprising that both brothers are looking for safe seats despite they being Lalu Prasads sons and leader of opposition and makes tall claims of returning to power, he said.

I want to say there is no safe seats for them in the state, Mr Rai said.

While Tejashwi Yadav is currently MLA from Raghopur in Saran district his elder brother represents Mahua in neighbouring Vaishali district.