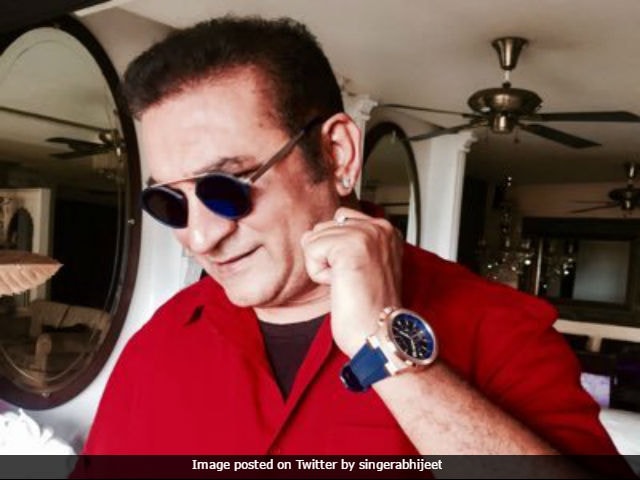 New Delhi: Singer Abhijeet Bhattacharya is back on the micro-blogging site Twitter after his account was suspended by Twitter last week for offensive tweets against certain female users. The 58-year-old singer re-joined the micro-blogging site with a new unverified account on Monday and posted a video. In the video, a defiant Abhijeet Bhattacharya alleged that people are trying to 'curb' his voice. He added that he will denounce those people who criticize the country and the Indian Army. "I have started this new Twitter account till my verified account is not active again. You can only follow me on this account the rest are fake. They are causing me trouble. Boliye jai hind, bharat mata ki jai. Vande Matram. I am back. We will together eliminate all those who raise their voice against the country," said Abhijeet Bhattacharya.

In a recent interview to news agency PTI, Mr Bhattacharya also accused author Arundhati Roy, who actor-politician Paresh Rawal tweeted about, of having his account suspended. "All Arundhati and JNU group behind this after Paresh Rawal and I tweeted against Arundhati for her anti-India stand," PTI quoted Abhijeet Bhattacharya as saying. Mr Rawal's controversial tweet suggested that Ms Roy be 'tied to a jeep.'

A day after Abhijeet Bhattacharya's account was suspended, his colleague Sonu Nigam quit Twitter, explaining in 24 tweets that he was saddened by what he perceived as a lack of freedom of speech. Mr Bhattacharya and Mr Rawal are equally entitled to their opinions, he said.

Promoted
Listen to the latest songs, only on JioSaavn.com
Abhijeet Bhattacharya started his Bollywood career in 1990 with the film Baaghi. He has sung for films like Om Shanti Om, Gangster and Dhoom. In the Nineties, Mr Bhattacharya sang for actors like Shah Rukh Khan, Saif Ali Khan and Akshay Kumar.