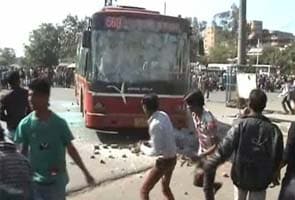 New Delhi: Rapid Action Force teams have been deployed in Delhi's Mangolpuri area, where protests against a seven-year-old girl's alleged rape at a government school turned violent yesterday. The area is calm today and the extra police presence is said to be a precautionary measure.

The girl, a Class II student in a primary school run by the Municipal Corporation of Delhi (MCD), has been discharged from the hospital where she was being treated. Her family has said in a police complaint that she was raped on Thursday afternoon.

On Friday, around 500 people gathered outside the hospital in protest and threw stones and bricks damaging several buses, police patrol vans and shops in the area. Police used lathi-charge and fired tear gas shells to disperse them. Seventeen people have been arrested and charged with rioting and destroying public property.

The police have made no arrests yet in the rape case, but have detained 10 men who had access to the school building, including a security guard and two male teachers of the school, and are questioning them. Some of them were taken for a Test Identification Parade or TIP to the hospital yesterday, but the child, who doctors say is still in psychological trauma, failed to identify any of them.

The police have sought the help of a non-government organisation to counsel the child as they try to get more details about the incident from her.

The North Delhi Municipal Corporation has ordered an internal inquiry into the incident and has been asked to submit a report.

Expressing her shock at the incident, Delhi Chief Minister Sheila Dikshit has ordered better security and supervision in schools in the capital. She said, "The incident is inhuman and shameful. It is a shocking incident. The municipal corporation must strengthen their existing security infrastructure in the schools."

Promoted
Listen to the latest songs, only on JioSaavn.com
There were widespread protests for days in Delhi after the brutal gang-rape of a 23-year-old medical student in a moving bus in December last year, demanding better security for women in the national capital. The police have made promises since, the government has brought an Ordinance on new laws on sexual assault, but cases of rape and assault of women have continued with alarming regularity in Delhi.