The tongue-in-cheek remark came from Samrat Chaudhary, an outspoken member of the Nitish Kumar cabinet who holds the Panchayati Raj portfolio. 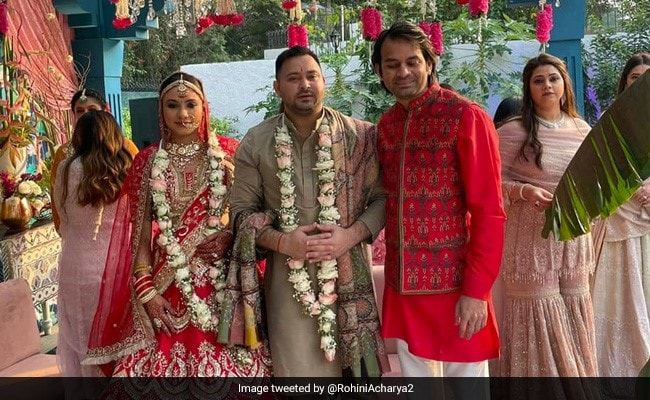 The opposition Rashtriya Janata Dal (RJD) in Bihar should give up its demand for a caste-based census following its leader Tejashwi Yadav's exogamous marriage, a BJP minister in the state said on Saturday.

The tongue-in-cheek remark came from Samrat Chaudhary, an outspoken member of the Nitish Kumar cabinet who holds the Panchayati Raj portfolio.

"In fact, Tejashwi Yadav should be asked to which community does he now belong - the one of his parents or the one of his wife," said Mr Chaudhary, referring to the leader of the opposition's recent wedding to childhood friend Rachel Iris, who has now taken up a new name - Rajshree. The minister was asked about differences between his party and the chief minister's Janata Dal (United) with regard to the caste census.

The state legislature has twice passed resolutions in support of a caste census and although BJP members endorsed these, the party finds itself in a quandary over the refusal of the Narendra Modi government at the Centre to carry out such an exercise.

Nitish Kumar, who had met the PM over the issue a few months back, heading a delegation of which Tejashwi was a part, has indicated that he intended to go in for a headcount of different castes in the state.

The Chief Minister has also said that he will be convening an all-party meeting on the issue before ordering the survey.

Mr Chaudhary, however, was of the view that "it is for the BJP and the JD(U) to take a call on the issue" since both parties shared power.

"In any case, the Yuvrajs (crown princes) of both UP and Bihar have broken the caste barrier. Hence, their parties should stop worrying about caste census," said the BJP leader in an oblique reference to Samajwadi Party leader Akhilesh Yadav, whose wife belongs to a different caste.