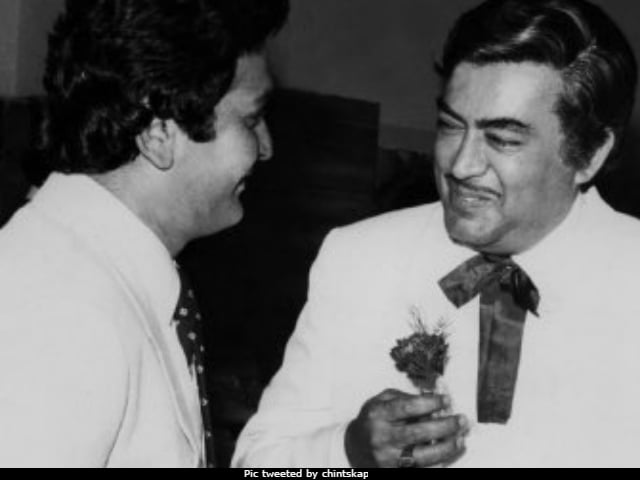 New Delhi: Rishi Kapoor always has some throwback memory up his sleeve and fishes them out with ease on the appropriate occasion. For example, Sunday coincided with the 79th birth anniversary of legendary actor Sanjeev Kumar and Mr Kapoor had a delightful picture to share. We stumbled upon this blast from the past on a visit to Rishi Kapoor's Twitter and saw it captioned: "Great talent. Sanjeev Kumar would have been 79 today. Did one film with him which never released. Thank you Hari bhai, we love your movies!" It is as if Rishi Kapoor read all our minds and poured it out on Twitter. Sanjeev Kumar was born as Harihar Jethalal Jariwala and died in 1985 at the age of 47.

The throwback piece is an old black and white one, in which both Rishi Kapoor and Sanjeev Kumar can be seen sharing a light moment. The photograph could actually be from the sets of a film (the one which never made it to the theatres) or just a showbiz party from the Eighties - both men were at their handsome best with Mr Kumar sporting few streaks of white hair.

Great Talent. Sanjeev Kumar would have been 79 today. Did one film with him which never released. Thank you Hari bhai,we love your movies! pic.twitter.com/ZdrSROFs01

Promoted
Listen to the latest songs, only on JioSaavn.com
In his tweet, what the Karz actor is referring to is perhaps starring in a full etched role in a film also featuring Sanjeev Kumar. In 1978, B R Chopra-directed the late actor in Pati Patni Aur Woh, which also had guest appearances by both Rishi Kapoor and actress Neetu Singh, two years after which they got married.

Interestingly, Sanjeev Kumar shares his birthday with celebrated director Guru Dutt, who died in 1964. The memory of Sanjeev Kumar is best etched in the minds of cine-goers as the revengeful yet hapless cop in Sholay, co-starring Dharmendra and Amitabh Bachchan. Naya Din Nai Raat, Mausam, Koshish, Aandhi and Trishul are some of his most remembered works.