That's Little Ranbir In Pic Posted By Rishi Kapoor. Can You Identify The Others?

Rishi Kapoor tweeted a throwback picture of the Kapoor trio as kids, in what looks like a toy train 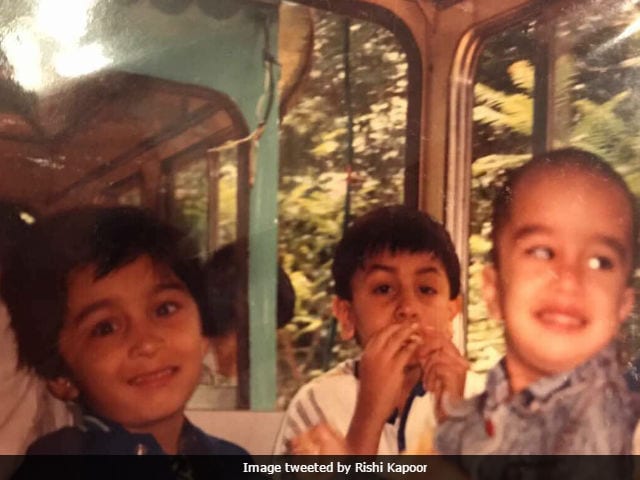 New Delhi: There was a time when Ranbir Kapoor and Shraddha and Siddhanth Kapoor played together. Fast forward to a few decades and they are now making films together (at least Sharddha and Siddhanth are). On Thursday (read throwback Thursday), actor Rishi Kapoor tweeted a picture of the Kapoor trio as kids, in what looks like a toy train, along with a collage of the three all grown up. Rishi Kapoor wrote in caption: "Thank you Shakti Kapoor who sent me the children's picture. I made the grown-ups. Siddhanth, Ranbir and the pretty Shraddha. God Bless All! (sic)" Can you identify who's who?

Thank you Shakti Kapoor who sent me the children's picture. I made the grown ups. Sidhant,Ranbir and the pretty Shraddha. God Bless All! pic.twitter.com/RDpV4jTUjl

In the throwback picture, Ranbir is on the window seat busy playing with a whistle while Siddhanth smiled for the camera. A semi-bald Shraddha looked sideways, but with a very cute smile.

Rishi Kapoor and Shakti Kapoor have co-starred in several films in the Eighties and the Nineties. Yaraana, Bol Radha Bol, Gharana, Dosti Dushmani are few of the film's in which they've worked together.

Promoted
Listen to the latest songs, only on JioSaavn.com
Sharddha and Siddhanth, born to actor Shakti Kapoor, are co-starring in Apurva Lakhia's Haseena: The Queen of Mumbai. They play the role of siblings Dawood Ibrahim and Haseena Parkar. Shraddha was last seen in Half Girlfriend opposite Arjun Kapoor.