PK Basu prefaced his virtual third degree by saying he had authored the book "Asia Reborn", and is a teacher of economic history.

Rahul Gandhi was confronted with a question on his family's contribution to India's economy.

New Delhi: Rahul Gandhi confronts a combative questioner in Singapore on his family's contribution to India's economy, in a video that has been widely shared on social media. Whether the Congress president got in the last word depends on which side of the debate you are on.

The man asking the question, PK Basu, said he had authored the book "Asia Reborn", and is a teacher of economic history. "Why is it that, when your family ruled the country, India's per capita income grew slower than the world average, but since your family relinquished the PM-ship, India's per capita income has grown much substantially faster than the world average?" he asked.

Rahul Gandhi countered: "And what is your hypothesis?"

Mr Basu replied tartly: "I asked you the question. I'm here to ask the question... My hypothesis is in my book. Please read the book."

The round was handed to him by the audience, which laughed and clapped. 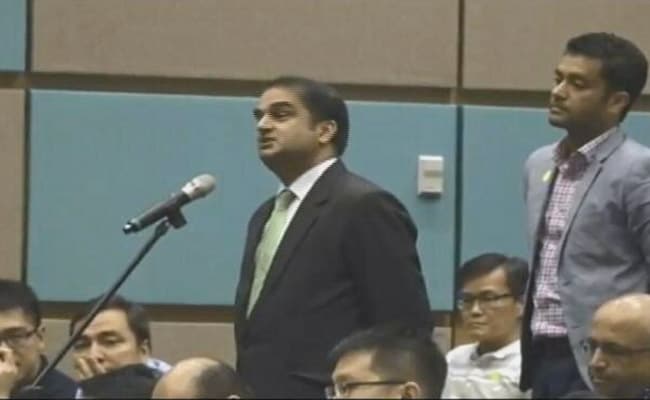 PK Basu said he had authored the book "Asia Reborn", and is a teacher of economic history.

Soldiering on despite being asked by a moderator whether he wanted to ignore the question, Rahul Gandhi commented, "You are giving a helluva lot of power to one family."

The back-and-forth continued until the 47-year-old Congress chief delivered his clinching argument. "So you are saying that I have absolutely no role in Indian politics from 2004 to today? You are saying that? Make up your mind. I either have a role or I don't, you can't give me both options," he said. Cue a round of applause.

"Now you notice something else... Mr Narendra Modi would never do that. You would never have the ability to say in front of Modiji what you said to me. And I am absolutely blazingly proud of that," he added.

Promoted
Listen to the latest songs, only on JioSaavn.com
Game, set and match, the Congress claimed and tweeted: "With political discourse hitting new lows everyday, Congress President Rahul Gandhi shows how to gracefully handle detractors and call their bluff."

Tweeting with the trending hashtag #WhenYouAreRahul, the BJP's Amit Malviya posted: "Strange to see Rahul Gandhi obfuscating and avoiding direct response to Prof Basu's question. Also what does Rahul Gandhi have to do with UPA government between 2004-14 unless he is admitting that Dr Singh was a titular head and the Gandhis were running the show. #WhenYouAreRahul".

No Proposal For Bilateral Trade With Afghanistan: Centre In Lok Sabha