Priyanka Chopra, Pretty In Pink, Will Melt The Most Unromantic Of Hearts

Meanwhile, fans back home are awaiting an announcement about Priyanka Chopra's Bollywood projects - she is currently in Mumbai 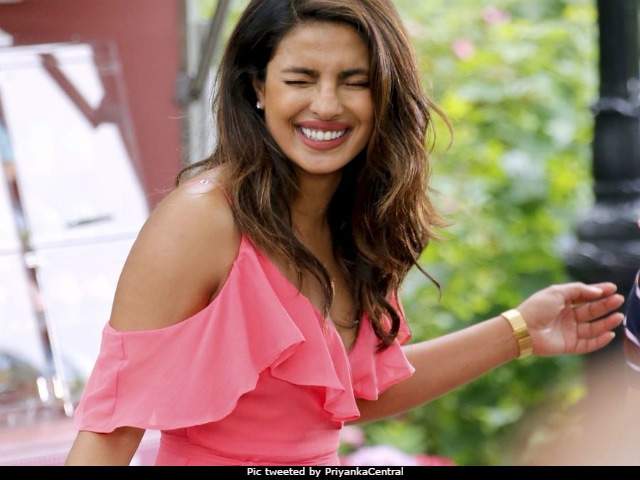 New Delhi: Actress Priyanka Chopra has begun work on her third Hollywood film, Isn't It Romantic, already. Pictures from the sets of the film in New York's Central Park have been shared by fan clubs on social media and are every bit frame-worthy. Priyanka looks absolutely pretty in a candy pink dress with ruffled neckline and sleeves. She blends in perfectly with the Spring-like feel of the park, and also the sets, everything about which looks pretty. There's a cute cafe on the sets of the film with pastel shaded furniture and then there's Priyanka Chopra to top it all. Priyanka was joined by Australian actress Rebel Wilson and actor-comedian Adam DeVine on sets. Priyanka and her co-stars appeared to have lots of fun at work and the pictures are proof of that. Actor Liam Hemsworth is also part of the cast of Priyanka's film.

Meanwhile, Rebel Wilson, who is known for her performances in comic roles, tweeted something about her wardrobe of the day. "It's soooo hot in NYC. I'm glad I went with the unbreathable yellow double layered jacket and wool skirt," Ms Wilson wrote along with pictures of herself and Priyanka.

It's soooo hot in NYC. I'm glad I went with the unbreathable yellow double layered jacket and wool skirt! pic.twitter.com/GFRkLUwOzM

Isn't It Romantic casts Priyanka as Isabella, a yoga enthusiast while Rebel Wilson features as Natalie, an architect based in New York City. Liam Hemsworth plays her best friend. Meanwhile, Adam DeVine features as one of Natalie's love interests.

Promoted
Listen to the latest songs, only on JioSaavn.com
The Todd Strauss-Schulson-directed film is scheduled to hit the theatres on Valentine's Day in 2019 while Priyanka Chopra's second Hollywood movie A Kid Like Jake is scheduled for 2018. Priyanka Chopra made her Hollywood debut this year with Baywatch, co-starring Dwayne 'The Rock' Johnson.

Meanwhile, fans back home are awaiting an announcement about Priyanka Chopra's Bollywood projects - she is currently in Mumbai. She has reportedly signed a film with Sanjay Leela Bhansali, the details of which are not known.