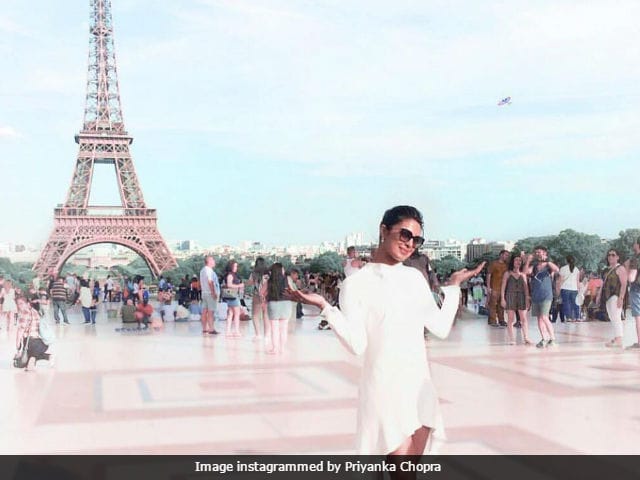 New Delhi: There was a desi girl in the A-list front row at the Armani Prive show in Paris last night. Priyanka Chopra, wearing a chic white Armani dress, rubbed shoulders with Sophie Loren, Isabelle Huppert, Kate Winslet and Naomi Watts at Paris Couture Week, also posing with Giorgio Armani for pictures. "Such a spectacular show," Priyanka captioned of the pictures she posted on Instagram. "Amazing to be with an exceptional group of women," she wrote alongside another. "I had a fan girl moment," the 34-year-old actress captioned a photo of herself with grande dames Sophia Loren and Isabelle Huppert. See Priyanka Chopra's pictures here:

Amazing to be with an exceptional group of women celebrating the house of @armani . Lovely evening. @naomiwatts #sophialoren #katewinslet @isabelle.huppert #tangWei

Such a spectacular show. Thank you for having me Mr. Armani #backstage #PCinParis #couture2017 @armani

Priyanka Chopra's colleague Sonam Kapoor is also in Paris for Couture Week - she walked the ramp for designers Ralph & Russo, closing the show in a white bridal look.

Promoted
Listen to the latest songs, only on JioSaavn.com
Globetrotter Priyanka jetted to Paris from New York, where she is a semi-permanent resident. Last month, she was in Prague on a working holiday. Her adventures are catalogued on Instagram so it's a little bit hard to believe Priyanka's mom when she says her super busy daughter has a 'boring life,' as she just did. Madhu Chopra's exact words, answering a question on if Priyanka's life should be made into a film, were: "She is leading most boring life and filmmaker who will decides to make a film on her life will also be annoyed because there is nothing. She only goes for work and returns home from work therefore her biopic will be very boring," reports news agency IANS.

'Boring' is certainly the last word to describe a life that involves starring in an American TV series - Quantico - and also making a Hollywood film at the same time. Priyanka played the villain opposite Dwayne 'The Rock' Johnson in the recently released Baywatch and is currently filming A Kid Like Jake. In between, she attends events like the Oscars, Golden Globes and Met Gala. And, of course, fashion weeks - she was spotted at the last New York Fashion Week.